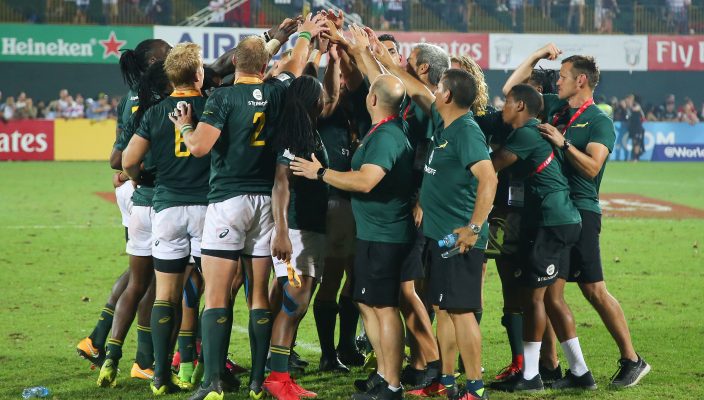 To keep a New Zealand team scoreless in a rugby match is almost impossible; to prevent the All Black Sevens team from scoring in a final even more so.

Yet, that was exactly what the Blitzboks did on Saturday in the final of the Emirates Airlines Dubai Sevens, blanking the current Rugby World Cup Sevens and Commonwealth Games gold medallists in their 15-0 win, a defensive effort which left Springbok Sevens captain Siviwe Soyizwapi ‘almost speechless.’

The winger turned 27 on Saturday and received the best birthday present from his team as they delivered a masterclass, handing the captain his very first gold medal in the Dubai Sevens.

“I was saying to my roommate Ruhan (Nel) yesterday morning how great it would be if we won the tournament on my birthday,” said Soyizwapi after the team lifted the trophy at The Sevens Stadium.

“And now we did. Since that final whistle went, I have been almost speechless, taking in the effort the guys put out there.”

With the SA Rugby Sevens Academy team winning the International Invitational tournament in Dubai, it was understandable that Soyizwapi credited the Springbok Sevens programme as a whole.

“We have great depth at the moment and that pushes the guys even more,” he said.

“The Academy side also won their final and there are also several current Blitzboks in that team. We are very fortunate to be in that position. As a squad we always strive for improvement.”

The Blitzboks arrive back in Cape Town on Sunday and will assemble again on Monday.

“We are playing in front of our home fans and our families, so it will be a big week. It will be important though to start all over again on Monday, start fresh and from zero leading into the weekend,” said Soyizwapi.

Rosko Specman, who was named Player of the Final, said it was a memorable performance, as the team played as a unit.

“It was such a massive honour to play with these guys again,” said Specman.

“It is such a great feeling to know that when you run onto the field with this band of brothers, nothing will be left out there.

“It is such a privilege to be able to express your God-given talent with a team like this. I play with a smile on my face because I enjoy every second of being out there. I love this game.”

For Seabelo Senatla, who scored the third try in the final to extend his national try-scoring tally to 227, said it was great to be back in Dubai, where he last played in 2017.

“I had a slight ankle strain on Friday, so I sat out of the action, but everything was fine for the final day,” said Senatla.

I have to give credit to our medical staff, they called it and it worked out perfectly. We already trust them, and after today, I trust them even more.”