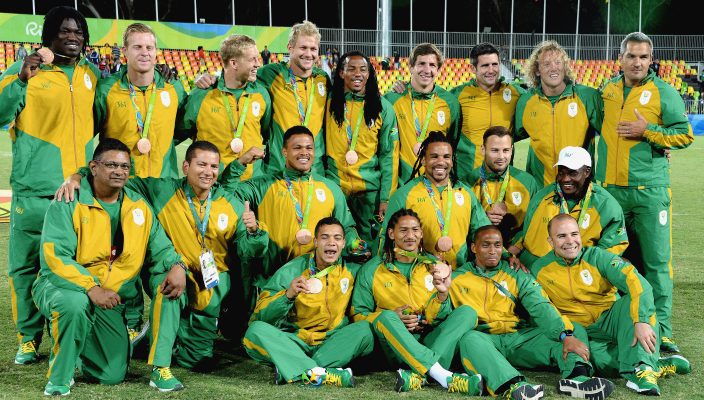 South Africa’s two World Rugby Sevens Players of the Year, Werner Kok and Cecil Afrika, described the bronze medal won by Team SA at the Rugby Sevens tournament of the Olympic Games in Rio de Janeiro, Brazil as one of their career highlights.

Kok and Afrika were members of the Blitzboks team that comprehensively beat Japan 54-14 in the bronze medal match to earn South Africa a first ever Olympic medal in Rugby Sevens.

“It is a phenomenal feeling,” said Kok, who was named the World Sevens Player of the Year at the end of 2015.

“Just to be able to compete here and represent your country, to play for this team and be part of the Olympics was an achievement in itself. To add a medal, even if it is bronze and not the gold we came here for, is awesome.”

Afrika, who was named World Rugby Sevens Player of the Year in 2011, shared these sentiments.

“This was not the result we wanted as a team, but I am still extremely thankful for the bronze,” said Afrika.

Afrika scored two tries in the match against Japan and said the Blitzboks used their opportunities in this encounter: “The guys kept believing in the processes and finished off when we had to. Against Great Britain in the semi-finals, the exact opposite happened and we never made use of the opportunities we created.”

Kok agreed: “Against Japan we did not make it bigger than it was and played our structures. We stuck to our basics. The guys also want to show that we are a quality team and that we can do it.”

Both decorated players feel that Rugby Sevens is here to stay.

“The rugby was great and I think sevens has established itself as an Olympic sport. There were the obvious disappointments, but also some awesome performances,” Afrika said.

Kok added: “This gives every rugby player a chance to be part of the Olympics. There is now something else to achieve in rugby too and that is wonderful.”

“What an honour and a definite highlight in my career so far,” said Rasivhenge. “In fact, I cannot wait for the Olympics to come around again in four years.”