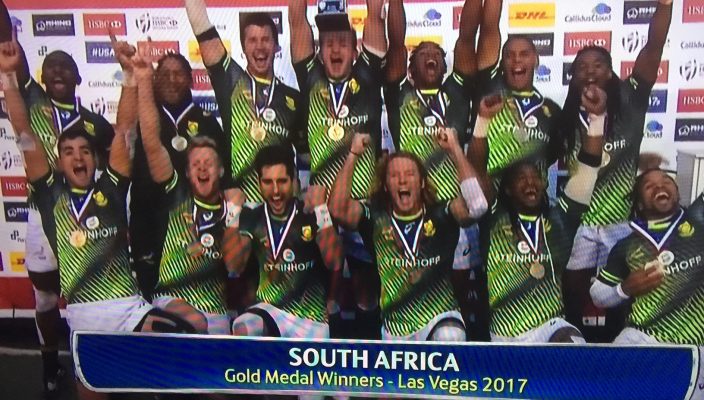 Springbok Sevens playmaker Rosko Specman is back in the Blitzboks team for the HSBC Paris Sevens tournament in the French capital next weekend, while it will also be a memorable first visit to Stade Jean Bouin for Dewald Human, who will debut for South Africa in the penultimate tournament of the HSBC World Rugby Sevens Series.

The Blitzboks hold a commanding 25 point lead over second place Fiji with two tournaments of the 2016/17 season left and South Africans’ final dash to the line and World Series glory will be boosted by the return of Specman, who missed the tournaments in Hong Kong and Singapore due to a hamstring injury sustained in Vancouver.

Despite their series lead, Springbok Sevens captain Philip Snyman said the team will be focused only on a strong performance in their opening game against Scotland.

“We have not started any of the eight tournaments this year looking at the log and will not do so for Paris either,” Snyman said.

“Our mindset and attitude have been a simple one this year and we will stick to it, as it delivered the results. We have worked hard, prepared well and all want to go out there to represent our country and make ourselves and our supporters proud.

“Boring as it may sound, the focus will be nowhere else, but our opening game against Scotland. We have been successful when we found early momentum and that will be our objective again.”

Specman and Human come in for Stedman Gans and Zain Davids respectively from the team that played in Singapore last month. Gans and Davids have been named in the Junior Springboks team that will travel to Georgia later this month to play in World Rugby’s Under-20 World Championship.

It is no co-incidence that Specman was involved in all four tournament victories in Dubai, Wellington, Sydney and Las Vegas, where he was named Player of the Final, but for Springbok Sevens coach, Neil Powell, is it all about the team effort.

“It is great to have Rosko back – he has been in commanding form all season,” Powell said.

“Having said that, I am actually happier having him back due to his contributions as a team player, as that is what we really stand for as a squad. It is all about believing in the system, which will then allow the individual to express himself.”

Human, who plays as a sweeper, has been a regular for the SA Rugby Sevens Academy team in recent tournaments and also played in Vodacom Super Rugby for the Southern Kings last year.

Powell was pleased for Human as well as Ryan Oosthuizen, who has been selected as one of the forwards travelling to Paris after making his debut in Hong Kong as an official reserve following an injury to Selvyn Davids. The former DHL Western Province Under-21 midfielder then replaced Davids in the official squad for the HSBC Singapore Sevens a week later.

“Dewald has been around for a while now and has delivered solid performances for the Academy side, so I am really happy for him. Ryan is a well-grounded individual and also responded well to all the challenges he faced so far, so I am confident in having him in the squad,” said Powell.

“We were looking at giving some youngsters opportunities this season anyway as we need to broaden our base and with Kyle Brown, Justin Geduld, Stephan Dippenaar, Carel du Preez and now Selvyn Davids out injured and Seabelo Senatla and Kwagga Smith on Vodacom Super Rugby duties, it created this opportunity for Dewald and Ryan.”

Snyman will be backed up by the vastly experienced core of Chris Dry (60 tournaments), Branco du Preez (53 tournaments) and Cecil Afrika (51 tournaments).

South Africa will face Scotland, Japan and Canada in Pool A. The tournament will be played on 13 and 14 May.

The Springbok Sevens team for Paris (with tournaments and points) is: