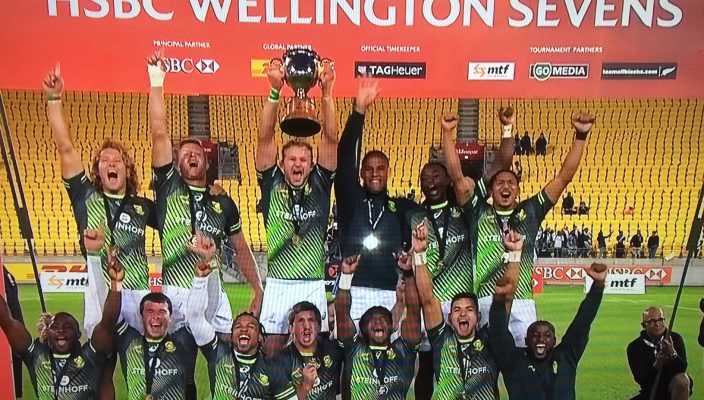 Blitzbok winger Siviwe Soyizwapi said the structures and systems employed in the Springbok Sevens squad set-up make it easy for new players to fit in and prosper.

The former Southern Kings back is on his third tour with the Blitzboks, after debuting in Hong Kong in April last year. His appearances were limited, due to the presence of World Rugby’s Sevens Player of the Year, Seabelo Senatla, but the 24-year old feels no pressure when taking the field in place of the try-scoring ace.

“I am happy to run onto the field and get some game time,” said the man is known as “Shakes” by his teammates.

“In terms of my progress, the system in the team is of such that you can easily slot in and perform, providing that you stick to the structures. The coach always says that we need to trust the system and he was proved right many times.”

Soyizwapi has scored nine tries for the Blitzboks and keen to score more when given the opportunity: “A winning team is a happy team and we are all in a good space. We are losing two big players soon, but the next guy coming in will be able to fill any shoes, as the system will look after him.”

Specman said he is enjoying his current responsibility of super sub in the team. The sweeper normally replaces Branco du Preez during the second half of matches and did not disappoint in Wellington last weekend, scoring a crucial try in the final, seconds after coming onto the field.

“I don’t mind to play off the bench. In a way, I like the fact that we replace one unpredictable player with another as it puts pressure on the opponents,” said Specman, who will play in his 17th tournament and has scored 35 tries to date.

“I enjoy playing under pressure, as this brings out the best in me, so coming off the bench and perform is not a problem for me. There is a good vibe in the squad and we are keen to get the tournament underway.”

Meanwhile, Sandile Ngcobo, who travelled with the team as the official reserve player, had to return to South African on Thursday due to a family bereavement. He is replaced by Stephan Dippenaar, who already travelled from South Africa to join the squad.