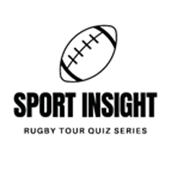 A quiz series geared at testing your rugby knowledge while having some fun with family and friends.

The SPORTS INSIGHT Quiz is a virtual event, which will be hosted on the Zoom App, ticking all the above-mentioned boxes and will be sure to test your rugby knowledge.

So, get the family or your mates together for an exciting evening as we look to build some excitement for the highly anticipated Test series.

Along will this amazing quiz, rugby fans will also be treated to a talk-show, aptly named ‘On the Couch’ with a former Bok (Robbi Kempson, Krynauw Otto & Braam van Straaten) and former Wales prop Rhys Thomas. They will discuss the latest news surrounding the tour as well as provide some expert insight.

The quiz master, Larry Benjamin has organised in excess of 2 000 quizzes well over a decade, 13 years to be exact. The virtual event will be hosted on the Zoom-platform.

The SPORTS INSIGHT Quiz will consist of six quiz nights/rounds during the current tour. Two quizzes per week, over three weeks, will focus on creating the vibe and energy needed in the build-up to the Test matches.

The first quiz of the week, on Tuesdays, will be open for school children (19 years and younger) to test their rugby knowledge. The Wednesday edition of the SPORTS INSIGHT Quiz will be open for all rugby boffins, experts, pundits, fans, friends, media, and corporates who are hoping to create a buzz as the tension builds toward the three Saturday Test matches.

The set of questions will differ for each quiz meaning rugby fanatics from across the globe can test their knowledge and finally put to bed the question ‘who is the greatest rugby mind in our friendship circle’.

RHYS THOMAS was born in Johannesburg, South Africa and represented Wales in seven Test matches as a tighthead prop. Thomas matriculated at King Edward VII in Johannesburg, who also produced Joe van Niekerk and Bryan Habana during the same time when Thomas’ was at the prestigious school. He represented Newport in 126 first class matches before a heart attack brought his career to a premature halt.

ROBBI KEMPSON has served the game of rugby on various levels and continues to do so as coach at the Kings. Kempson, who provides expert analysis on television, represented the Springboks in 37 Test matches as a prop between 1998 and 2003.

GURTHRÖ STEENKAMP was part of the Springbok team who defeated the British Lions in the test series of 2009. Steenkamp amassed a total of 53 Test during his International career. He also represented French top 14 side, Toulouse, in 128 matches and made 60 Super Rugby appearance for the Bulls. Since retiring from the game, in 2018, he imparts his skills and knowledge from experience to front rankers from across the world.

HANNES NIENABER is a freelance rugby journalist with more than 15 years’ experience, covering the game from schoolboy level to International rugby. Nienaber is also the owner of the exclusive school rugby website, School of Rugby.

For more information on the series, or to secure your place, mail
events@schoolofrugby.co.za . Tickets for each quiz is sold at R250 per team /screen or R 200 per week if you take all 3 in the series. Please note, only 90 places are available per quiz.