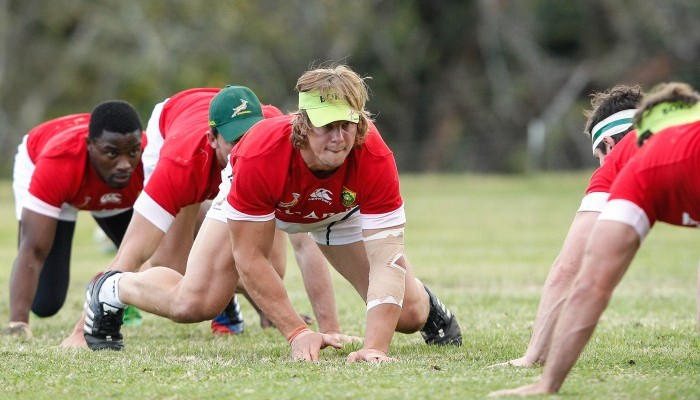 The 20 Coca-Cola Craven Week captains had the privilege of hearing first-hand what drives Springbok flank and former SA Under-20 captain Arno Botha in a special cloakroom function on Wednesday evening as a reward for leading their teams in Polokwane.

Botha, who grew up in Nylstroom in the Limpopo Province, addressed the captains at an informal gathering arranged by Coca-Cola where they had the opportunity to ask questions and find out more about the down-to-earth player. The hard-working flank made his Springbok debut during the Castle Lager Incoming Series in June, but sadly tore knee ligaments in the second Test, against Scotland in Nelspruit.

Botha kicked off proceedings speaking about the privilege of being a captain – he led the Junior Springboks at the Junior World Championships in 2011 – and he encouraged the players to embrace important moments such as these, just as he did when he earned his first Springbok cap.

He urged them to make the necessary sacrifices in life to reach the highest level of the game, but also warned them that there was more to life than rugby. Botha added that one of the lessons he had learned after his knee injury was that good could come out of any situation, no matter how bad it seemed.

On a personal note, Botha revealed that two of his role models were Vodacom Bulls captain Pierre Spies and Springbok captain Jean de Villiers and he emphasised the importance of having role models and mentors to guide one through the good and challenging times.

He also stressed the importance of putting in the hard yards at training and working harder than everyone else to be the best, like legendary Springbok fullback Percy Montgomery, who spent hours at extra training sessions weekly.

“It was fantastic to have the opportunity to speak to the captains,” said Botha.

“I hoped they listened to the lessons I had learned since participating in the Coca-Cola Craven Week and that they take something from it.

“The keys to success are to be the best player you can be and to train the hardest. Nothing comes easy in life, you have to work for it, and that is what they need to remember.”