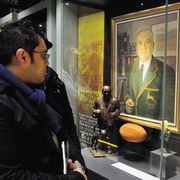 Springboks and former national team captains were united in predicting that the new Springbok Experience rugby museum would be a major success after it opened its doors to the public at the V&A Waterfront in Cape Town for the first time on Tuesday.

Springbok captain Jean de Villiers was the first official visitor to the new attraction closely followed by the rest of the Springbok squad and former national team captains, all of whom were ‘wowed’ by the world-class new installation – before the doors were thrown open to the public at the sounding of the noon gun.

The VIPs and players were taken on a tour of the two-storey building which features an interactive ‘Springbok Trials’ skills zone as well as flagship Springbok Shop and a series of museum galleries charting the history of South African rugby.

“The Springbok Experience is a museum which is arguably unlike anything seen in South Africa before,” said Jurie Roux, CEO of the South African Rugby Union. “We have worked with one of the world’s leading sports museum designers to create a unique and compelling experience for the general visitor as well as rugby fans.

“It will be a bricks-and-mortar, 364-day-a-year opportunity for rugby supporters from home and overseas to interact with rugby and the Springboks. [The Experience is closed only on Christmas Day]

“It’s a world-class visitor attraction in the middle of one of Africa’s most visited destinations promoting our great game and team.”

VIP guests were in agreement with Roux:

· “It is an unbelievable experience and tells a telling story of the impact rugby had and still has on our country,” De Villiers said. “It even, as I’ve just learned inside, resulted in a ceasefire during war so that a rugby match could be played. It shows the power of rugby.”
· Rugby World Cup 2007 winning captain John Smit said it made him ‘proud all over again to be associated with the Springboks and to know that this brand has such an impact on society’.
“It displays the unique and colourful history and past of our rugby incredibly well and accurately. I would advise everyone to come and visit, and to experience one of the world’s most unique brands.”
· Former captain Dawie de Villiers agreed: “This will attract all ex-players, and not only Springboks. It is not only an interesting, but also a very captivating story of the divisions of our past. It also tells very clearly that we have reached the point where everyone can move on and support one team in solidarity.”

Former captain Peter Jooste had similar sentiments. “This brings closure to a lot of people, as it tells the true story of rugby from all sides of the spectrum. I am very proud of this, and young and old should come and visit the Springbok Experience. It really brings unity,” he said.
Springbok coach Heyneke Meyer was equally moved. “It is a very emotional experience and makes you realise how special it is to be part of it. There is a great emotion to see all the heroes from your past, but then you also realise what responsibility comes with being part of the Springboks. I would like to congratulate SARU for this initiative.”

The two-storey Springbok Experience design was produced by Mather & Co of Wilmslow in the UK. Their credits include the award-winning Wimbledon lawn tennis museum, the five-storey National Football Museum in the UK and they recently completed their work on the IOC museum in Lausanne.

In conjunction with South African attraction installation specialists, Digital Fabric, which works on visitor attractions around the world, and other South African service providers, the project was completed in ten months.

The challenge to the designers was to produce a fun and engaging visitor experience, which has been achieved through a varied approach to the exhibits; beautiful object displays, state-of-the-art technology, large-scale audio visual projections and intimate touchscreens to allow visitors to delve deeper.

The Experience features more than 20 interactive touch screen exhibits; a total of 64 monitors and 20 projectors; an eight-minute film presentation in a mini Springbok cinema; more than 20 audio-visual exhibits and mechanical interactive exhibits for children.

The technology supports the storyline as SARU and the designers worked with a number of historians, players past and present, and specialists to develop the content themes and narrative structures in the museum. It provides an insight into South African society and culture through the eyes of rugby, as they are so inextricably linked, but without leaving the visitor overwhelmed.

“Rugby in South Africa is much more than just a game and it was important to us that rugby and the Springboks had a new home that everyone could be proud of,” said Roux.

“We believe we have achieved that and that the Experience will become a ‘must-visit’ for all rugby supporters.”

The Springbok Experience is open at the V&A Waterfront every day (except Christmas Day) from 10h00 to 18h00.