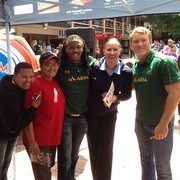 Afrika, Geduld and Jamba Ulengo were part of the BlitzBokke who finished fourth at the Gold Coast Sevens last weekend in Australia.

They attended 3 signing sessions in PE and Grahamstown and a media briefing at the Nelson Mandela stadium, the iconic venue of Round 3 of the HSBC Sevens World Series in December.

Tickets start at R50 and are available at Shoprite and Checkers and through Computicket.