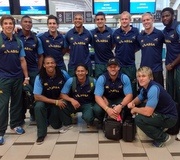 The Springbok Sevens rugby squad departed on Monday to Australia where the opening tournament of the HSBC Sevens World Series will take place this coming weekend at the Gold Coast at Skilled Park.

South Africa are seeded first in Pool B and face stiff opposition from a trio of European teams headed by England, France and Spain.

Speaking to the media on Monday newly appointed head coach, Neil Powell, said they are looking forward to get the season underway Down Under.

“We realise that every time a South African team takes the field then the expectation is for us to win. It is a huge motivating factor for the team and something we as a group embrace,” explained Powell.

The SA Sevens coach added he is happy with the team’s preparations for the annual World Series kick-off at the Gold Coast.

“A few players ended the last season with some injury niggles and they used the break and pre-season period to sort themselves. Playing wise, we used the Middelburg Sevens to try out a few new ideas and I am glad for the valuable opportunities it gave us to gauge ourselves,” according to Powell.

The team will be without former coach Paul Treu for the first time in almost a decade, but Powell said not much has changed within the setup, something he hopes his charges would be able to use to their advantage.

The former Springbok Sevens captain and World Series winner added he is fortunate to inherit a good and familiar structure: “I know a lot of other countries have changed coaching and player personnel but we are fortunate that apart from the change at head coach, we have a settled squad and management. However, we are taking nothing for granted and fully realise we will have to go out there and perform to the best of our ability.

“Vuyo (Zangqa, assistant coach) and I sat down a while ago and decided that that we will do only some minor tweaks because our core structure is so good thanks to the great work done by Paul. I am obviously excited about this challenge and looking forward to work with a great set of players and management.”

The Springbok Sevens will be aiming to improve on their runners-up spot last season, when they also managed clinched three tournament titles.