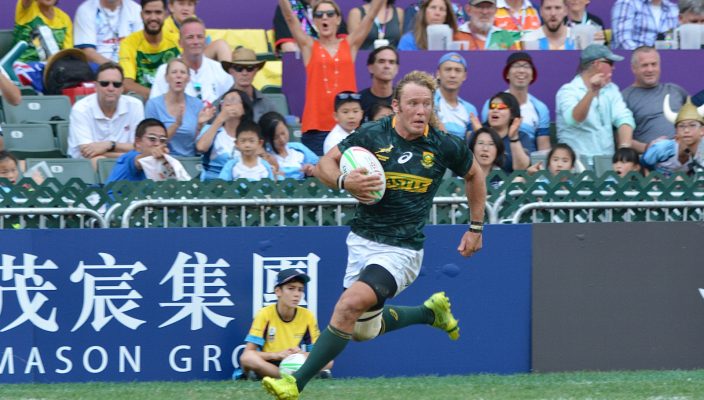 The Springbok Sevens team secured wins over Scotland and Samoa to finish top of pool A at the Cathay Pacific HSBC/Hong Kong Sevens on Saturday and will now face USA in the Cup quarterfinals of the competition on Sunday.

The USA currently are leading the log in the HSBC World Rugby Sevens Series.

Solid defence and patience on attack was part of the Blitzboks offering in the Hong Kong Stadium where they first outplayed Scotland 26-10 before getting the better of Samoa 21-7.

After beating Japan on Friday, the wins confirmed the top of the pool standings for South Africa.

Springbok Sevens assistant coach, Renfred Dazel, said the team ended top because ‘we took the physicality to them’.

“We had some hiccups in our game plan against Japan and even Scotland, but it went well against Samoa. We needed to be physical against them, did that and therefor managed to top the pool. We are pleased with that performance,” said Dazel.

“We need to recover well overnight. Day three of a tournament is always taxing on the body, so we need to make sure we get back here tomorrow well prepared.”

Against Scotland, it took all of six minutes for the Blitzboks to score as the Scots proved hard to crack. A try by Selvyn Davids was quickly followed by one from Stedman Gans to hand South Africa a 14-0 lead at the break.

An early try in the second half, by Ryan Oosthuizen, pushed the lead out to 21 points before Branco du Preez extended the lead with a try in the corner.

The Scots came back with two quick five pointers, but it was all over bar the shouting.

Against Samoa, it was again patience on attack that kept South Africa’s momentum. Impi Visser got the lead after six minutes and the converted try was the only score of the half.

The second half saw more good work on attack, with Justin Geduld and Werner Kok scoring converted tries. Kok’s effort was his 100th in the World Series. Samoa scored a late converted try, but the win was already in the bag for the Blitzboks.

Kok, who has scored three times so far in Hong Kong, thanked his team mates for the tries.

“I was just at the right place at the right time. I enjoy playing in the forwards and it is easy if everyone contributes.”

He said the USA match will be a tough one. “They are a tough side to play, but if we recover well we can give it our best shot on Sunday.”

The quarterfinals are (SA times)