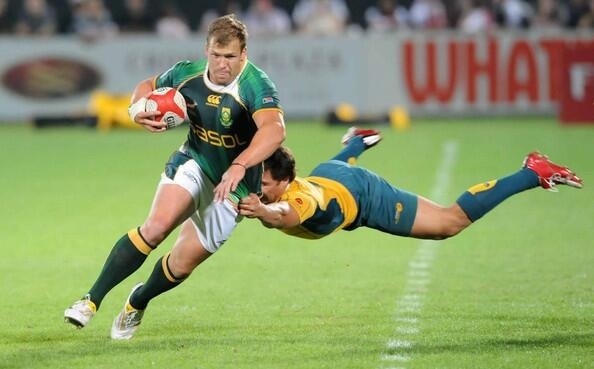 The Springbok Sevens, under the guidance of new coach Neil Powell, on Saturday safely navigated a tricky pool to book their places in the knockout stage of Round 1 of the HSBC Sevens World Series at the Gold Coast in Australia.

South Africa registered three impressive victories on the opening day of the two-day event. The Springbok Sevens opened their Pool B fixtures with a 29-5 victory over France and then romped home by 38-7 over Spain. They then won their pool decider 22-14 against England, scoring four tries in the process to book their knockout match against Wales.

Against England, South Africa trailed early on in the first half after Tom Mitchell darted through for a converted try. The Springbok Sevens hit back when first Stephan Dippenaar was fed by Stephen Hunt to dot down in the right-hand corner and then Cornal Hendricks used his power to burst through two tackles to score next to the upright.

Although Geduld missed an easy conversion, it was South Africa who led 10-7 at halftime. Immediately after the restart, Geduld showed an impressive step and turn of speed to easily score a try which he himself converted. With the Springbok Sevens dominating field and possession, Brown then found the gap to score South Africa’s fourth try to put the game beyond England with just over a minute to spare.

England had the last say with a sweeping move from one end of the pitch to the other which saw James Rodwell touching down under the posts, but it was way too late to prevent South Africa from a deserved win.

Neil Powell, the new Springbok Sevens coach, said after a good first day at the office: “It’s been a great day, three wins from three, but if we don’t come back tomorrow and play like we did tonight then it counts for nothing. I think there is a lot of character, only coming in two nights ago to come and play like this, I am really proud of them on day one.”

Skipper Brown added: “I think the most important thing was to get over that first hurdle against France. We played on scraps there a little against Spain, and we needed to sharpen up a little bit because England will always punish you for those small mistakes.”

Earlier, Powell got his new career in charge of the Springbok Sevens off to an impressive start when his team delivered a clinic performance to beat France 29-5 after leading 19-0 at halftime.

Junior Springbok Justin Geduld celebrated his return to the team with the first try and was followed on the score sheet by veteran forward Chris Dry and Stephan Dippenaar. France hit back with a score by Paul Albaladejo after the restart, but Powell injected some extra pace into his team’s attack when he brought on speedster Sampie Mastriet as a replacement.

Mastriet quickly used his fresh legs and impressive burst of speed to score under the posts while veteran Frankie Horne also dotted down in his 51st World Series tournament.

South Africa continued their dominance after the break, which in tries for Cecil Afrika and Jamba Ulengo. Spain’s only try was scored by Francisco Hernandez.

The Gold Coast quarter-final draw for Sunday is: