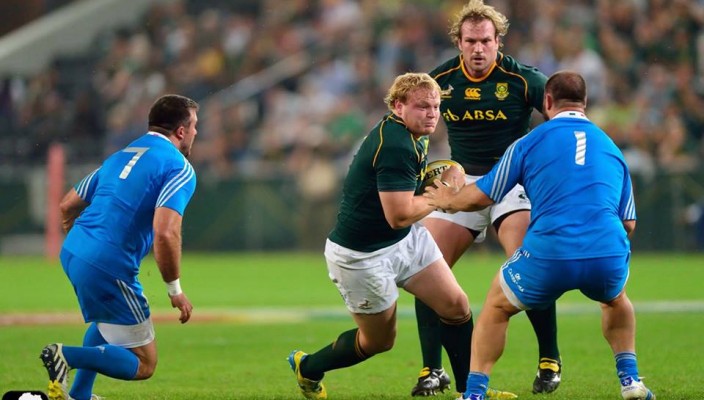 Bismarck du Plessis will play in his 50th Test for South Africa off the bench against Argentina in Mendoza on Saturday.

The experienced hooker has been selected on the bench after Springbok coach Heyneke Meyer decided to select an unchanged starting 15 for the second round of The Castle Lager Rugby Championship, with Adriaan Strauss starting in the No 2 jersey.

The match 23 shows only one change from the team that beat the Pumas by 73-13 last weekend – Jano Vermaak comes onto the bench as replacement scrumhalf for Fourie du Preez.

If Vermaak gets game-time, he will play in his second Test after making his Springbok debut in Durban against Italy in June. He picked up an unfortunate injury in that Test, which ruled him out of the rest of the Castle Lager Incoming Series.

“We’re fortunate that we are able to keep an unchanged team for this Test,” said Meyer.

“It will be a special day for Bismarck as he will become only the 24th South African to play in his 50th Test for the Springboks, and it’s very well deserved. Over the years, he’s always given 100% for the Boks and he will go down in history as one of the best hookers ever to play the game.

“We’re actually in a very privileged position to have two of the best hookers in world rugby in our system, in him and Adriaan. They bring out the best in each other and they will continue to grow as players and leaders in the team.”

Meyer said the Springboks know the Pumas will lift the intensity for Saturday’s match in Mendoza.

“We experienced first-hand how passionate their supporters are and how they can lift their team,” said Meyer.

“Having said that, our focus is on continuous improvement and we would like to keep on converting try-scoring opportunities, building on our good on-field discipline and improving our play at the breakdowns.”

The Springbok team to face Argentina in Mendoza is:

·         Jean de Villiers will extend his record as the most-capped Springbok centre, with 73 Tests in this position.

·         Bryan Habana will extend his record as the most-capped Springbok wing, with 86 Tests in this position. He will also break his and Joost van der Westhuizen’s record of six career appearances against Argentina and if he scores a try, will extend his record of 51 Test tries for South Africa. Bryan also just needs one try to equal the Castle Lager Rugby Championship record of Christian Cullen (New Zealand) who scored 16 tries in his Rugby Championship / Tri-Nations career.

·         If he goes on Bismarck du Plessis will reach the milestone of 50 Tests for his country. He will be the 24th player and second hooker in history to achieve this feat. If he scores a try he will also extend his own record of seven Test tries as a hooker for South Africa. If he goes on and play alongside his brother Jannie, they will extend their record of playing together in 26 Tests for the Springboks.

·         If he goes on and scores a try, Gurthrö Steenkamp will extend his own record of six tries as a prop for South Africa.

·         The referee is Steve Walsh of Australia. This will be his 15th Test involving South Africa. In the previous 14 South Africa have won 10, lost one and three ended in a draw. His last game for the Springboks was the corresponding game in Mendoza in last year’s Rugby Championship, which ended in a 16 all draw. Only Alain Rolland of Ireland, with 16 Tests, handled more Springbok Tests than Steve Walsh.

o   Saturday’s encounter in Mendoza will be the Springboks’ ninth Test in Argentina since 1993.