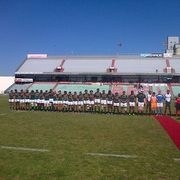 The Springbok Women on Saturday booked their place in the 2014 IRB Women’s Rugby World Cup in style by thumping Uganda 63-3 at the Buffalo City Stadium in East London.
The win marked the biggest victory in the history of the SA Women’s team and reaffirmed their status as the top African team.

Next year’s World Cup in France will mark SA’s third successive appearance in the international showpiece.

The Springbok Women delivered on their goal to apply pressure on the visitors early on, and were particularly effective at stretching Uganda’s defence and finding space out wide, which allowed them to run riot on attack.

Centre Mathrin Simmers scored the first of the team’s 11 tries in the opening 10 minutes to signal their intent early on.

Flyhalf Zenay Jordaan spotted numbers out wide and threw a long pass to Simmers, who outsprinted a few defenders to cross the tryline. This handed the Springbok Women an early 7-0 lead and bolstered their confidence.

Right wing Marlien Cronje inflicted further damage four minutes later as she fought off three defenders after a collecting a pass from inside centre Daphne Scheepers and used her speed out wide for the team’s second try and a 12-0 lead.

Uganda continued to struggle under the presser applied by the hosts and leaked another try, with Dolly Mavumengwana diving over the tryline after the forwards powered their way within metres of Uganda’s line.

Fullback Zandile Nojoko and the team’s general Zenay Jordaan followed to take the team’s try tally to five, which increased their lead to 29-0, and left Uganda with hard work ahead to claw their back into the match.

The visitors, however, did not give up hope and used their powerful forwards to force their way into the home team’s 22, but the hard work SA put in under the watchful eye of defence consultant Jacques Nienaber paid off, as they managed to shut them out.

As if trailing by a big margin were not tough enough, Ugandan lock Evenlyne Aweku received a yellow card for playing the ball from an offside position at a ruck, which piled even more pressure on the team.

The Springbok Women started the second half with the same urgency as that in the first, with Nojoko crossing the tryline for her second five-pointer minutes into the half after Jordaan again flung a long pass after spotting space out wide. This inflated the team’s lead to 34-0.

The visitors tried hard to plug the gaps in their defence, and they succeed in doing so for a few minutes, but they battled to shut out Marlien Cronje for her second try.

Uganda supported their solid defence with a determined effort on attack to retain possession for long periods, and it allowed them to work their way into SA’s 22.

But with the Springboks’ denying them from getting a sniff of the tryline, Racheal Babirye opted to kick for posts after being awarded a penalty, which allowed the visitors to score their first and only points of the match.

SA, however, finished off the match on a high note with flank Nwabisa Ngxatu running in the team’s 11th try to secure the team a 60-point victory and their biggest winning margin in history.