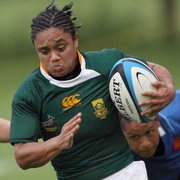 Springbok Women’s captain Mandisa Williams said on Tuesday she was pleased with her team’s early preparations for their crucial Rugby World Cup qualifier against Uganda in East London on Saturday.

According to Williams, the players are fully aware of the vital outcome of the clash, as well as the high expectations on them to perform.

A victory for the Springbok Women at the Buffalo City Municipal Stadium would guarantee them a place in the 2014 Women’s Rugby World Cup in France, while a defeat would rule them out of the international spectacle.

The team gathered in East London on Sunday and got down to business on Monday with two training sessions, followed by another two on Tuesday. These training sessions were conducted under the watchful eye of SARU GM High Performance Rassie Erasmus and defence consultant Jacques Nienaber, who are expected to remain in camp until Sunday.

While Williams admitted that they felt the pressure ahead of the match, especially given the high stakes, she said the players were focused on the task at hand and were working hard to improve every aspect of their game.

“The attitude among the players is positive and this automatically creates a good environment in the camp, which is fantastic ahead of such an important match,” said Williams. “More importantly the ladies are training hard and the new players have slotted in well. Obviously with a Rugby World Cup place at stake there has to be pressure, but the girls know what they have to do.”

Williams admitted that the experience and game time gained against quality international opposition in the Nations Cup last month, which featured matches against England, the USA and Canada, was invaluable in their preparation for Saturday’s match.

“The Nations Cup served as an eye-opener for some of the ladies about the high quality of top class international rugby and I am sure that will set them in good stead when we line up against Uganda,” said the captain. “As a group we certainly learned a lot at the tournament and that experience will boost our confidence this weekend. But similarly to us Uganda have everything to play for, so it is important that we deliver a quality performance in all aspects of our game to emerge victorious. The experience gained at the Nations Cup will only help us if we apply the lessons learned there on the field this week.”

The Springbok Women’s players and management team will host a coaching clinic at the Jongilanga Rugby Field (Brakfontein) in the Kwelerha Location on Wednesday, the area in which Williams grew up, in attempt to raise awareness of Women’s rugby and to show their support for the local the community.