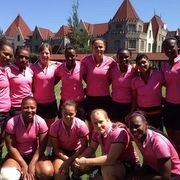 The Springbok Women Sevens will a face a tough task at the IRB Women’s Sevens World Series in Amsterdam on May 16 and 17 after being drawn in a challenging pool with Australia, Russia and France.
Australia and Russia are two of the eight core teams on the IRB Women’s Sevens World Series circuit, with the Australia currently trailing log-leaders New Zealand by only two points going into the final leg of the competition, while Russia are in joint-fourth position on the log standings with England.

France and South Africa, meanwhile, have been invited to participate in the series, and while it will mark the Springbok Women Sevens’ first and only IRB tournament leg this year, France managed to secure invites to the Dubai and China tournaments earlier this season.

Despite this, Springbok Women Sevens coach Renfred Dazel looked forward to the challenge.

“We have been drawn in a tough pool, but we are not surprised because the World Series features the top sides worldwide,” said Dazel.

“The tournament will be challenging especially since we will line up against teams that have had regular game time in the last few months, but we are determined to prove ourselves on the world stage and the only way to do that is to deliver the desired results against the best teams.

“Fortunately we have also been exposed to good competition in the last two months at the Hong Kong Invitational and the Confederation of African Rugby (CAR) Women’s Sevens in Kenya, but we know that we will have to step up our performance in Amsterdam.”

The matches against their African counterparts aside, the SA players have faced Brazil, France and Papua New Guinea this season, which Dazel believes provided an indication of the challenge that awaits them in the Netherlands.

“We faced France in the Cup semifinal at the Hong Kong Invitational and they beat us 19-5, so we know what to expect from them, while Australia and Russia’s log positions speak volumes about the quality of their teams,” said the coach.

“That said, we have been working hard at training since January and I am pleased with the progress we have made in terms of our quality of play. The players have also had the opportunity to gel as a unit, and hopefully that will show at the IRB series.”

With the CAR Women’s Sevens now history and the next tournament a month away, the players will have the luxury of a few days off to spend time with their families.

They will reassemble in Port Elizabeth next Monday to begin preparations for the Amsterdam tournament.