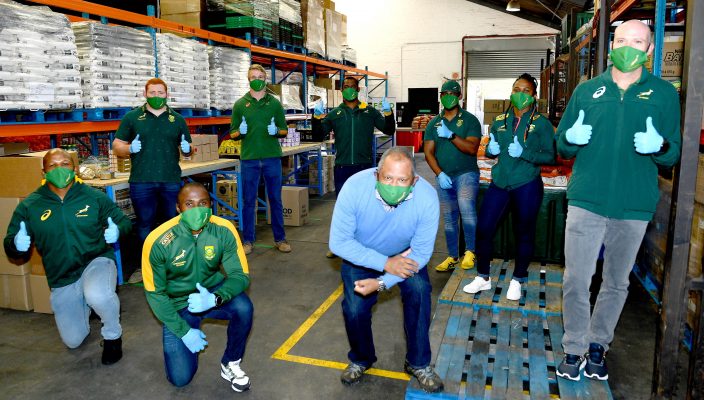 Springbok coach and captain, Jacques Nienaber and Siya Kolisi, led a delegation of eight national players and coaches at the Food Forward SA warehouse in Cape Town on Thursday, where they assisted in packing food parcels in the fight against hunger.

The visit to the Food Forward SA facility in Epping was part of SA Rugby’s #StrongerTogetherfor R32-12 campaign, whereby the Springboks are assisting with hunger alleviation through a unique campaign.

The other charity who will benefit from the campaign – where raffle tickets are sold for R32-12 and the players are giving away some of their most prized possessions from last year’s Rugby World Cup in Japan – is Gift of the Givers.

“Last year our message was #StrongerTogether and we really believed that the people of South Africa were behind us during the 2019 Rugby World Cup in Japan,” said Kolisi.

“Our presence here is just a thank you, really, and to help out where we can as a team and to say to the people of South Africa that we are with you.

“I know how much of a difference any bit of help can make. You can donate a small item to any charity that is raising money or buy a ticket to help our project, and it will make a difference because it takes the pressure off people who are struggling to survive.

“This was a great effort by the guys as well our Blitzbok and Imbokodo colleagues, and I would like to appeal to supporters to buy their raffle tickets, because they will not only stand the chance to win some amazing items, but their donation will make a difference in the lives of many people who are struggling at the moment,” said the Springbok captain.

Kitshoff said: “The #StrongerTogether for R32-12 campaign is nearing its end and we would like to encourage people to visit www.springboks.rugby, buy a raffle ticket for only R32-12 to win one of those amazing prizes up for grabs.

“This campaign works closely with Food Forward SA and Gift of the Givers, and they are making a huge difference in the lives of ordinary South Africans all over the country, with a helping hand where possible.

“To see the effort that goes on behind the scenes, to help feed hungry people in South Africa, has had a big impact on my life and it’s really humbling to see and be involved in this process,” added the big Springbok prop.

Prizes announced so far include a match jersey worn by Siya Kolisi in a RWC pool encounter, Faf de Klerk’s SA flag-print underwear, Rassie Erasmus’s lucky white shirt and a talk to raise funds for the winner’s charity of choice, a personalized RWC Trophy Tour to the house of one lucky winner and Herschel Jantjies’s RWC match jersey and the unique green “Champions” cap the squad wore after they beat England in the final – items that can’t be bought.

Gilbert, official ball supplier to RWC 2019 and SA Rugby, has also come to the party and added a limited-edition replica Cup final ball for every winner, commemorating last year’s final.

And ASICS, official apparel sponsor of the Springboks and SA Rugby, have thrown into the prize pool commemorative World Cup GEL-LYTE III sneakers and a new Springbok jersey.

The campaign has been built around the score in the Rugby World Cup final in November, in which the Springboks defeated England, 32-12. To find out more on the campaign, click here, or you can head straight to Computicket to buy.