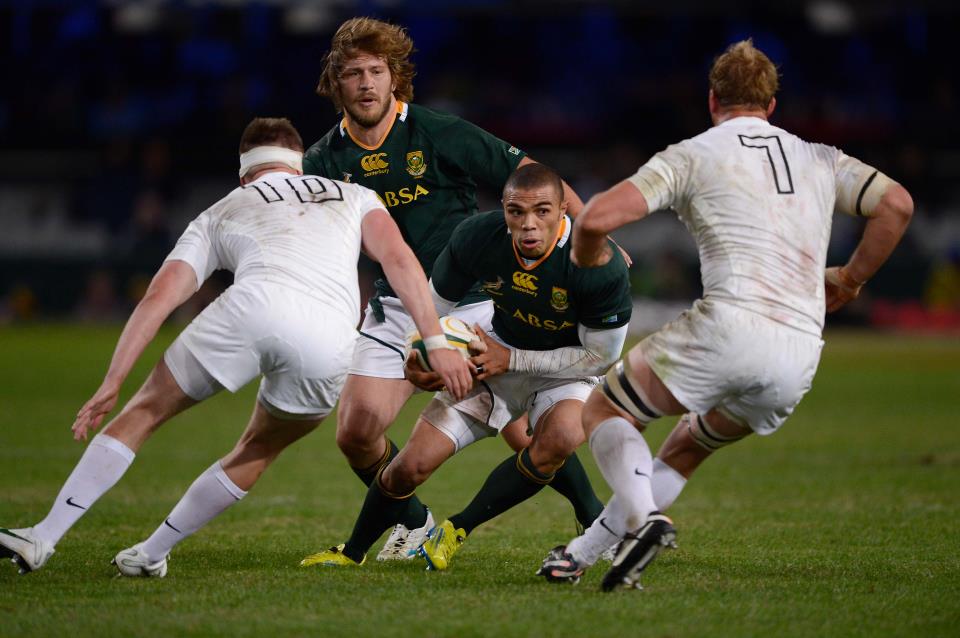 Bryan Habana was one the standout players against the English in Durban. More would be expected from him in the second test at Coca-Cola Park, Johannesburg. Photo by Denese Lups /Rugby15.

Springbok coach Heyneke Meyer made three changes to the match 22 for Saturday’s second Test in the Castle Incoming Tour against England at Coca-Cola Park in Johannesburg.

The only change to the starting 15 is at fullback, where Pat Lambie replaces the injured Zane Kirchner. Lambie replaced Kirchner after half-time last week and will play in his 13th Test for South Africa.

On the bench, Werner Kruger comes in for the injured Coenie Oosthuizen, while Bjorn Basson takes over from Lambie amongst the replacements.

Neither Kruger nor Basson featured in last weekend’s first Test in Durban, won by 22-17 by the Springboks. Both played in their last Tests for South Africa against New Zealand on the away leg of the Castle Tri-Nations last year.

“We decided against no unnecessary changes as we aim to build some continuity during this season,” said Meyer.

“We still have not had a lot of preparation time, but I’m pleased to have seen how the players have been getting stuck in – on the training field and during our off-field sessions.

“This weekend will be a big challenge yet again against a good England side, but our focus is still on ourselves. We need to show further improvement from last weekend and have to make a step up this weekend.

“We have confidence in all the players in our squad and that is why Pat, Werner and Bjorn have slotted in easily. Everyone knows what is needed this weekend and they have been very sharp at training. We now need to translate that to the match on Saturday.”

The Springbok team to face England in Johannesburg is:

Note: Springbok coach Heyneke Meyer does not have a Twitter account or a Facebook page. Media are urged to disregard any comments made by people impersonating Meyer on such channels.