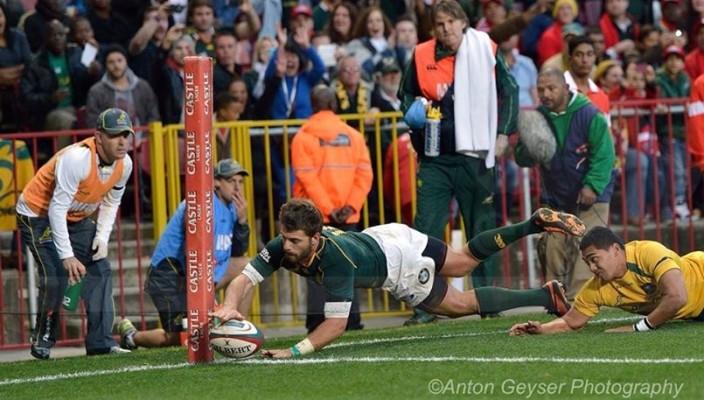 Springboks happy with win despite no bonus point

Both Springboks coach and captain, Heyneke Meyer and Jean de Villiers were very pleased following their convincing 28-8 win over the Qantas Wallabies at DHL Newlands on Saturday night.
The Springboks scored three tries, but neither the coach nor captain dwelled on a fourth try that would have resulted in a bonus point win.

“We have beaten the Wallabies with a record margin for Newlands, a field where one don’t score that many tries,” Meyer said afterwards.

“We played some great rugby in that first 20 minutes. We realised their defence were hanging back, so we could attack with ball in hand. The two yellow cards then hampered us, but we are not going to argue those as the referee is always right,” Meyer said.

“This was a great win for us and shows the progress we are making. It is most pleasing that we are scoring tries and we have beaten the Wallabies by 20 points. It was a great achievement.”

The two yellow cards and some sloppy line-out plays will get some attention in the wash-up after the match.

“We could not get our drives going, something we will be working on this week,” Meyer said.

Meyer pointed to the fact that the Wallabies are a great counter-attacking side.

“You always have that in your mind, so careless attack is never an option. They can punish you from all over the field.”

De Villiers feels that have ticked the boxes they wanted in this match.

“We have now scored seven tries to one in the two test matches against Australia, which shows that we are doing something right on attack.”

•It was the 50th test match appearances for Jannie du Plessis and Mornè Steyn and Meyer was pleased for his two loyal players.

“I am very happy for them. They played well and deserve the honour as both have been stalwarts to the Springboks.