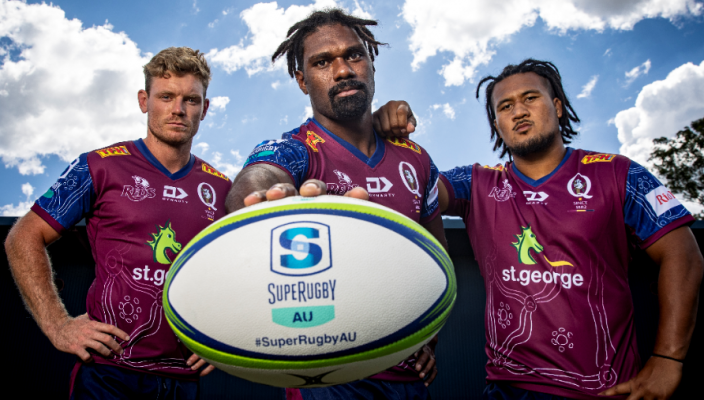 The St.George Queensland Reds have made two changes to their starting XV from their last-start victory over Melbourne for Saturday’s Grand Final replay against the Brumbies in Canberra.

After impressing in his first Super Rugby match a fortnight ago, Suliasi Vunivalu will make his starting debut on the wing seeing Jordan Petaia shift to his preferred position at outside centre with Hunter Paisami named at number-12.

Suspended following a red-card against Argentina while playing for the Wallabies late last year, Lukhan Salakaia-Loto will make his return this weekend at lock.

His inclusion in the starting side sees the versatile Seru Uru on the bench replacing Sam Wallis in one-of-four changes to the Reds’ reserves.

With Feao Fotuaika suspended for the next three matches, Zane Nonggorr will look to add to his three Queensland caps with his first appearance in the matchday 23 this season as a replacement tighthead prop.

The Reds welcome back a further two players – both of whom are returning from injury, with hooker Brandon Paenga-Amosa overcoming a neck injury and centre Josh Flook from a dislocated shoulder suffered against the Force on the Gold Coast in August last year.

“Suliasi has been working hard at training and gets his chance to start this weekend. It’s also great to get some guys back with Lukhan, Brandon and also Josh Flook all making their playing returns either from suspension or injury,” said Thorn.

Saturday’s clash in Canberra also doubles as the inaugural Harvey Norman Super Rugby AU First Nations Round, where both the Reds and Brumbies will wear their respective 2021 Indigenous jerseys – CLICK HERE to read more about the design and creation of the 2021 Queensland Reds Indigenous jersey.

Queensland play the Brumbies on Saturday night at 6:45pm AEST and will be broadcast live on 9Gem and simulcast live and ad-free on Stan Sport.

The Reds return home next week to host the Western Force on Saturday evening at Suncorp Stadium – CLICK HERE for tickets.