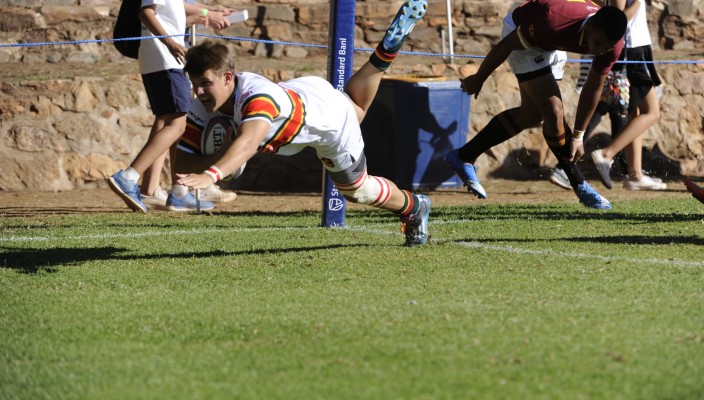 The first match on day 3 of the St John’s Easter Rugby Festival, presented by Standard bank, St John’s Harare opened up proceeding against the Lions Presidential XV. Even though the men from Zimbabwe produced a much better second half they could not match the pace, size or ball distribution of the Golden Lions and this combination side from the GLRU won convincingly by 27 points to 7.

Parktown Boys’ High and Hilton College, proved that the old beaten cliché of a game of two halves, still does ring true as Parktown went into the break 17 – 5 up, but Hilton College then roared back and scored no less than 22 points in just 11 minutes. A try by Parktown’s  hooker, Darnell Osuagwu did bring the score line back to a respectable 22, but Hilton College ably led by their captain Agnes Curtis and his kicking boot, had 27 on the scoreboard.

Hosts St John’s College, took on the Italian outfit, Rugby Viadana 1970 and dominated from the get go, they ran in 5 tries while fly half Kieran Houlston’s boot, converted 4 of those. The final shoreline in this match was 33 points to 7.

In one of the much anticipated matches of the afternoon, Monument and Helmakaar traded the lead 4 times before a try from centre Keegan Haman closed the game up and gave Helpies a 28 points to 15 victory.

Paarl Boys’ High and Hoërskool Nelspruit had one of the tightest first half tussles of the weekend and only a penalty from Nelspruit, Craig Bouwer separated the 2 teams at half time. Two tries from Paarl and some superb kicking from full back Giannai Lombard secured a hard fought 17 to 11 win for the boys from the Cape.

The sixth and final match of the 21st St John’s College Easter Rugby Festival between Paarl Roos and Afrikaanse Hoër Seanskool was billed as the headline clash of the festival and so it was! An early try from Affies put the pressure on, but then Breyton Maritz the lanky lock and centre Lyle Hendriks, dotted down while captain Damian Willemse, goaled both tries and a penalty to give his team a slender 3 point lead with less than 10 minutes to go. But a try from hooker, Schalk Erasmus, a conversion from the silky smooth fly half Ruan de Swardt and a penalty from de Swardt, with less than 3 minutes left on the clock, took the score to 24 points to 17  even attack after attack, Affies held on!