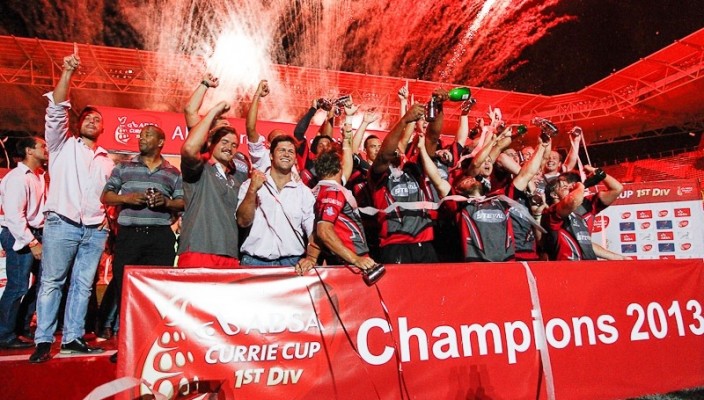 The Steval Pumas on Friday evening completed their dream Absa Currie Cup First Division season as they maintained their unbeaten run in the competition to win the final with a convincing 53-30 victory against the EP Kings at the Mbombela Stadium in Nelspruit.

The victory marked the team’s first Absa Currie Cup First Division title since the 2009 season and came with the special prize of the R1m winner’s cheque. The EP Kings did not walk away empty-handed, as they received R500000 as the runner’s up.

The Steval Pumas opened up the scoring in the second minute with a penalty by pin-point goal-kicker Carl Bezuidenhout, but EP Kings fullback Scott van Breda slotted over the first of his penalty kicks in the fourth minute to level the scores.

The next few minutes were tightly-fought as the teams gave their all to get on the front-foot, and with the breakdowns being a key area for both sides in the pursuit to gain an edge, this area was particularly tight.

The Pumas, however, found their rhythm as the half progressed and this paid off as their hard-running allowed them to get over the advantage line, which they supported with an innovative approach on attack to find the gaps in the Kings’ defence.

While the Kings defended well and succeeded at shutting the Pumas out early in the first quarter, the home team finally made a breakthrough in the 17th minute thanks to a good line break and fantastic support play, which set up RW Kember for the team’s first try and an 8-3 lead.

They backed this up with another stunning try seven minutes later by fullback and man-of-the-match Coenie van Wyk, who received a pass out wide from wing Rosco Speckman following a turnover. He danced his way through the defence to touch down over the tryline for his side’s second five-pointer and a 13-3 lead.

Van Breda and Bezuidenhout exchanged penalties as the half drew to an end, but the Pumas to entered the break 19-9 up.

The home side built on their strong first-half performance upon returning to the field, and made their presence felt five minutes in as Van Wyk crossed the tryline for this team’s third try thanks to a stolen lineout and quick distribution out wide.

Bezuidenhout extended their lead to 29-9 in the 50th minute as he slotted over his fourth penalty of the match, which left the Kings with a tough task to work their way back into the game.

The Port Elizabeth side, however, showed their fighting spirit and reaped the rewards with Ntabeni Dukisa scoring their first try after catching the defence off-guard by opting to run directly as opposed to spreading the ball out wide. This allowed them to close the gap between the sides to 13 points, which was enough to work the visitors’ back into the game.

Bezuidenhout, however, again stretched the home team’s lead with a long-range penalty, this time following an infringement by the Kings in a scrum, which was followed minutes later by a try by wing JW Bell to push the match out of reach for the Kings, who found themselves trailing 39-16.

The Pumas, however, were dealt a double-blow as lock Giant Mtyanda was sin-binned for collapsing a maul in their red zone in the 69th minute, while Christo le Roux followed in the 71st minute after tripping EP Kings hooker Hannes Franklin en route to the tryline. Adding to the yellow cards, the Kings were awarded a penalty try, which they converted to reduce their deficit to 39-23 with seven minutes to go.

The Pumas, however, refused to let this dampen their spirits and they again spread the ball, with Van Wyk receiving, and breaking through the defence to complete his hat-trick.

Flank Renaldo Bothma inflicted further damage with two minutes to go on the clock as he crossed the tryline for the team’s sixth five-pointer to seal the victory and secure the R1m winner’s cheque.

The Kings, however, fought until the bitter end, with replacement scrumhalf Kayle van Zyl dashing though the defence to finish the match on a high note. But this had no influence on the result.