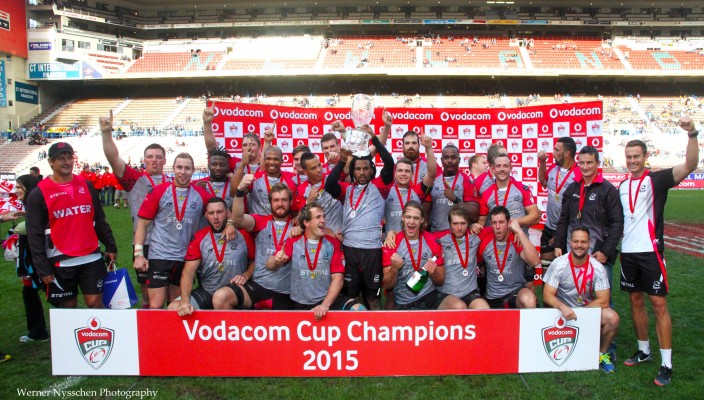 A new Vodacom Cup champion was crowned in Cape Town on Saturday afternoon when the Steval Pumas lifted the coveted trophy for the first time ever. The Lowvelders, coached by former Springbok Sevens player MJ Mentz, became the eighth team to win this competition since its inception in 1998.

The Steval Pumas completed a remarkable run in their three playoff matches – they beat the Vodacom Cup champions of 2012, 2013 and 2014 on three consecutive weekends away from home.

On Saturday, they upset the odds yet again by beating DHL Western Province, the only unbeaten team left in the competition, in the final. The scoreline of 24-7 suggests it was a walk in the park for the Steval Pumas, but they had to dig deep and showed the value of playing knock-out rugby with experienced players.

And as they did in the semi-final last weekend, big lock Rudi Mathee scored a try for the visitors and livewire flanker Marnus Schoeman added a brace of five-pointers.

Although he could only add four points to his overall tally, Steval Pumas flyhalf JC Roos finished the season as the top points scorer with 115 – the only player in 2015 to surpass 100 competition points – while SWD Eagles speedster Alshaun Bock scored the most tries, with eight.

Schoeman, courtesy of his four tries in the last two matches, ended second on the list of try scorers with seven, while DHL WP’s Sikhumbuzo Notshe, Kefentse Mahlo of the Vodacom Blue Bulls, Martin Sithole of the Down Touch Griffons and the Hino Valke duo of Riaan Arends and Anrich Richter all scored six tries

The Steval Pumas were crowned Vodacom Cup champions after they completed a 24-7 (halftime 19-0) win over DHL Western Province in the final at DHL Newlands in Cape Town on Saturday.

The win saw the Lowvelders secure their first Vodacom Cup title after they were losing finalists in 2013 and they upset the form book as they inflicted the first defeat of the season on the Capetonians, the 2012 champions.

The Nelspruit-based Steval Pumas ran in three first-half tries while their defensive work throughout the match was immense. DHL WP were stymied by their inability to string together any meaningful passages of play.

The helter-skelter opening exchanges saw both teams’ flyhalves miss early penalty attempts but the Steval Pumas’ forwards were starting to gain ascendency and they finally took advantage when flank Marnus Schoeman flopped over the tryline for an unconverted score after a powerful maul that gained 22 metres.

The heavy conditions underfoot were forcing both teams to keep the ball among the forwards and DHL Western Province turned down two kickable penalties in favour of kicking for the corner to set up attacking lineouts.

However, the decision backfired as the Pumas’ defence held on both occasions while the visitors were winning the battle at the breakdown as Province conceded five turnovers in the first half.

DHL Western Province were left rueing their decision to turn down the kickable penalties when the Steval Pumas turned defence into attack as lock Rudi Mathee took an inside pass from pivot JC Roos, after good work in the build up from scrumhalf Reynier van Rooyen, before cantering over for a converted try in the 31st minute.

The Pumas’ forwards continued to dominate the contest and a lineout five metres from the host’s tryline resulted in loosehead prop Khwezi Mona diving over from close range for his first Vodacom Cup try. Roos nailed the touchline conversion as the Pumas eased to a 19-0 lead with two minutes left in the half.

Province finally got on the scoreboard after 11 minutes of the second half when they were awarded a penalty try after Schoeman was yellow carded for a pulling a maul down with Province just short of the Pumas tryline.

Despite their numerical advantage the hosts were unable to break down the superb Steval Pumas’ defence. The visitors finally made sure of the win when Schoeman was mauled over for his second try with just seconds left in the game.