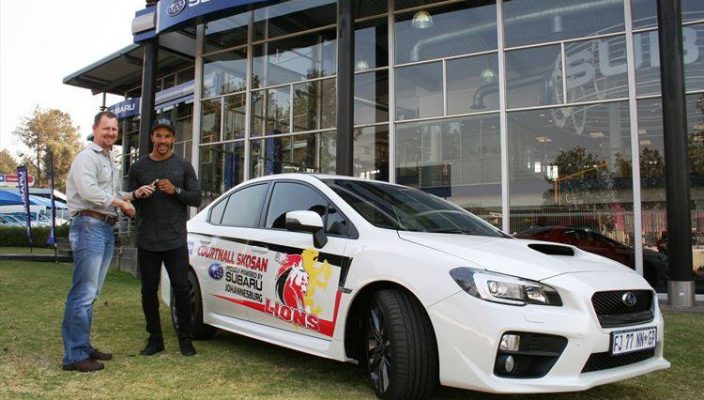 Subaru Johannesburg is excited to announce the successful appointment of Courtnall Skosan as an official brand ambassador. As part of the role, the 25-yr old Golden Lions Rugby Star has just taken delivery of a Crystal White Pearl 2016 Subaru WRX from Subaru Johannesburg.

Morne Viviers, Dealer Principal at Subaru Johannesburg who concluded the Ambassadorship is ecstatic about the partnership. “Subaru plays a significant role in SA Sport especially through our sponsorship of the South African Hall of Fame. As a brand, we resonate with the courage, commitment and adventure of sportspeople in all disciplines. Courtnall Skosan is no different in this regard. He has had a magnificent 2016 season with the Lions, playing a significant role in their runner-up position in this year’s Super Rugby campaign. His humble attitude, his tireless work ethic and commitment to excellence is commendable. He represents everything we stand for at Subaru.”

Courtnall has been a Subaru fan since he was a little boy. “I remember as a little boy making the sound of the Subaru WRX when watching movies. I probably watched Born 2 Race 100 times and still don’t get sick of it. It is a real honour and privilege for me to be a part of the Subaru Johannesburg family. These cars are fantastic and the perfect fit for who I am and what I do. They represent real Power with Control.”

There is no doubt that Courtnall Skosan is a rising star in South African rugby. His professional rugby career started out with the Blue Bulls at Under-19 and Under-21 level where he excelled, earning a call-up to the South African Under-20 team for the IRB Junior World Champs in 2011. That same year, the 20-yr old graduated to the senior Blue Bulls team and remained there for a further two years before signing with the Golden Lions for the 2014 season.

2016 has been a stellar year for Skosan who was one of the key figures in the Emirates Lions’ second place in the Super Rugby campaign. His explosive pace mostly down the left flank is something to behold. Having scored no less than 10 tries in the Superugby season, he has firmly stamped his name in SA Rugby.

Choosing the right car for Courtnall Skosan was never going to be difficult. Courtnall is known for his speed and agility – the Subaru WRX matches that perfectly. With its combination of aggressive design, performance enhancing technologies like torque-vectoring and a one-of-a-kind Symmetrical All-Wheel DriveT system at its core, 197kW of power is delivered in complete control.