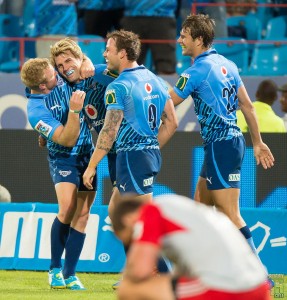 The pace-setting DHL Stormers kicked off their Vodacom Super Rugby tour of New Zealand with an emphatic victory in Dunedin over the Highlanders as they cemented their position at the top of the log.

These two sides occupied the top two positions on the combined log before round seven kicked off, but DHL Stormers showed their class as they strangled the Highlanders by 21-6 – only the fifth time in 183 games in New Zealand that a South African team did not concede a single try.

In South Africa, the Vodacom Bulls returned to winning ways with a sublime second-half performance against the seven-time champion Crusaders in Pretoria (32-30), while the Toyota Cheetahs were too strong for the MTN Lions in Bloemfontein (26-5), with Johan Goosen becoming the first player this season to surpass 100 points in this competition.

The Sharks were on the receiving end of some wonderful play by the Hurricanes in New Plymouth on Friday as the team from Wellington won 42-18.

The Sharks conceded the most Vodacom Super Rugby tries in one match in almost seven years when the Hurricanes beat them by 42-18 in New Plymouth on Friday morning.

The six tries scored by the ‘Canes was the most The Sharks have let through since the Crusaders crushed them by 77-34 in Christchurch on 29 April 2005, scoring 11 tries in the process.

On a day where nothing worked out for The Sharks, with mistakes on attack and defence holding them back, the Hurricanes were at their sublime best, correcting the wrongs from last weekend when the Toyota Cheetahs gave them a hiding in Wellington.

The home side had the game in the bag at the break, when they lead by 25-3. The Sharks scored two tries in the second half – by outside centre JP Pietersen and hooker Craig Burden, in only his third start for the KwaZulu-Natalians at this level – to make their score look a bit more respectable, but on the balance of things, this is a performance they would probably like to put behind them as soon as possible.

The only “negative” from the Hurricanes’ perspective was that their young pivot, Beauden Barrett, missed six out of his 11 kicks at goal, meaning he finished the match on a season total of 98 points, opening the door for Toyota Cheetahs flyhalf Johan Goosen to become the first player to 100 Vodacom Super Rugby points in 2012 on Saturday.

Sharks prop Jannie du Plessis was cited and received an “off-field” yellow card for foul play after he was involved in an altercation with Hurricanes flanker Karl Lowe late in the first half, which lead to a massive brawl and saw the referee issue white cards to both players.

The DHL Stormers kept the Highlanders try-less as they kicked off their Vodacom Super Rugby tour of Australasia with a superb 21-6 victory in the Forsyth Barr Stadium in Dunedin on Saturday morning.

It was only the fifth time in the history of Vodacom Super Rugby – that is in a total of a whopping 183 matches since 1996 – that a South African side did not concede a try in New Zealand.

The DHL Stormers have built their unbeaten run this season on rock-solid defence and Saturday’s victory was no different. They’ve only conceded seven tries thus far in 2012 (the Chiefs, with six tries against them, being to only team with a better defensive record than the Capetonians).

The Highlanders struggled with the pressure applied by the DHL Stormers with their smothering defence. Both the visitors’ tries, by winger Gio Aplon and fullback Joe Pietersen, were scored from turn-overs.

Pietersen was superb for the visitors and his try, after some deft footwork and a great chip kick which he gathered, set the Capetonians up for a handy first-half lead. 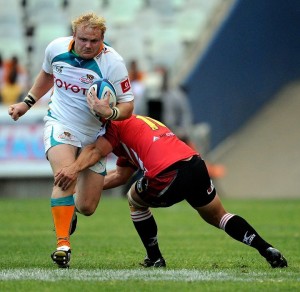 The Toyota Cheetahs reigned supreme in Saturday’s “Cat Fight” when they beat the MTN Lions by 26-5 in a Vodacom Super Rugby derby at the Free State Stadium in Bloemfontein on Saturday afternoon.

In the process, young Toyota Cheetahs flyhalf Johan Goosen became the first player this season to reach 100 points in the competition when he landed his first penalty goal of the match, in the 20th minute.

Goosen, who is in line for his second season with the SA Under-20s, has scored one try, 14 conversions, 25 penalty goals and one dropped goal for a total of 111 – 13 points ahead of Beauden Barrett of the Hurricanes, who is in second position.

The result was all but secured by the end of the first half as the home side went into the break ahead by 23-0.

Two tries by Toyota Cheetahs outside centre Robert Ebersohn in the first half, coupled with some solid goal kicking by Goosen and unforced errors by the MTN Lions, saw the Free Staters control much of the match.

The Toyota Cheetahs managed to keep the MTN Lions scoreless for 65 minutes before Cobus Grobbelaar got the visitors’ only points of the match.

While the Toyota Cheetahs really played well in the first half, their struggled to keep up that intensity after the break as they could only add three points to their total, with the MTN Lions “winning” a drab second half by 5-3.

MTN Lions flyhalf Elton Jantjies received an “off field” yellow card after he was cited for a dangerous tackle on Goosen late in the first half. 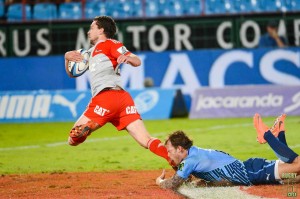 Springbok flyhalf Morné Steyn kicked 22 points as the Vodacom Bulls returned to winning ways when they beat the Crusaders by 32-30 in an enthralling Vodacom Super Rugby match at Loftus Versfeld in Pretoria on Saturday afternoon.

But the Vodacom Bulls had to dig deep at the end as the visitors scored two late tries which saw them go from 32-16 to 32-30, forcing the home team to desperately defend a slender lead going into injury time after they looked to be on their way to a comfortable win.

Although the home team conceded three tries and could only score two, they did well to win this game despite not being at their best for most of the encounter. The Crusaders managed to poach possession fairly regularly, robbing the Vodacom Bulls of necessary momentum in the first half.

Crusaders captain Kieran Read crossed for the first try in the eighth minute and although the Vodacom Bulls looked a bit shell shocked at that stage, they managed to keep the seven time champions try-less more than an hour after that, until the visitors scored two late tries in final eight minutes.

Steyn’s 22 points was the difference in the end as he converted both tries by the Vodacom Bulls – by Dean Greyling (loosehead prop) and Wynand Olivier (inside centre) – and added six penalty goals, punishing the Crusaders’ ill-discipline.

Olivier’s try came from a deft little chip by Steyn, while Greyling fooled Crusaders fullback Israel Dagg with a superb dummy as he sprinted towards the tryline following good work by flanker CJ Stander.