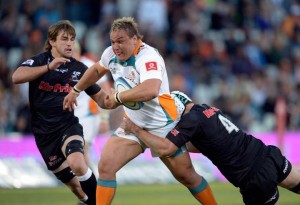 Coenie Oosthuizen on the charge. Photo by Denese Lups /Rugby15.

The DHL Stormers won their 10th game of the season to move back into pole position on the Vodacom Super Rugby log, albeit thanks to a rather frustrating victory over the Waratahs in Cape Town on Saturday evening.

Despite leading by 16-3 at the break and playing some lovely rugby, the DHL Stormers only managed to beat the Waratahs by 19-13 in the end.

In Bloemfontein, The Sharks recorded their third successive win over the Toyota Cheetahs (34-20) to further close the gap between them and the Vodacom Bulls in the South African Conference.

The Vodacom Bulls lost a dogfight against the Highlanders in Dunedin (16-11), but managed to get a crucial losing bonus point.

The defending champions Reds saw a spirited MTN Lions team fight back from 28 points down to lose by 34-20 in Brisbane.

The Highlanders brought to an end a five-match Vodacom Super Rugby winning streak by the Vodacom Bulls in Dunedin on Saturday morning when they beat the three time champions by 16-11.

It was a classic arm wrestle in which the Highlanders’ advantage in territory and possession in the second half paved the way for the victory. The Vodacom Bulls also struggled to convert a clear first-half advantage into points as they simply made too many errors.

In the first half, the Vodacom Bulls dominated the home team, especially in the line-outs, but they weren’t properly switched on on attack and as a result only lead by 6-3 at the break.

The Highlanders fixed their line-out after the break and played most of the rugby in the Vodacom Bulls’ half. They also deprived the team from Pretoria from possession.

The visitors’ discipline was also not great, especially at the breakdown, and Dean Greyling (loosehead prop) was sent to the sin bin in the 56th minute after a team warning by the referee.

The crack in their 14-man defence finally appeared in the 64th minute as Jarrad Hoeata (lock) scored the home team’s first and only try when he crashed over from short range. The try came moments after the TMO had ruled that a previous tryline-crossing was inconclusive.

The Vodacom Bulls managed to get their hands on the ball a bit more after that and when replacement hooker Willie Wepener scored with five minutes left on the clock, it was game on.

However, Morné Steyn, playing in his 100th Vodacom Super Rugby match for the Vodacom Bulls, missed the conversion – his third unsuccessful kick of the match – and the Highlanders’ defence held firm in the final stages to secure them the win.

The Reds were too strong for a gallant MTN Lions side in Brisbane on Saturday morning as the defending Vodacom Super Rugby champions won by 34-20.

With 25 minutes left, the game was basically over as a contest as the home team raced to a 28-point lead, but the team from Johannesburg never gave up and scored two well-worked tries in the final 20 minutes to close the gap on the score board by 14 points.

They also played reasonably well in the first half, but the MTN Lions were effectively put away in the first 15 minutes after the break as the Reds upped the pace to score three quick tries, racing from a half-time lead of 13-6 to 34-6 in after 55 minutes.

Those three tries – by Saia Faingaa, Chris Feauai-Sautia and Will Genia – not only sealed a bonus point for the Reds, but also put to bed any thoughts the MTN Lions had of fighting back from their half-time deficit on the score board.

In that time, the MTN Lions also had to play with only 14 men as Franco van der Merwe (lock) was sent to the sin bin. The Reds scored two tries in those 10 minutes.

The visitors deserve a lot of credit. Even when they were behind by 28 points they never gave up and were rewarded with two tries in the final 20 minutes, with Martin Bezuidenhout (replacement hooker) and Jaco Kriel (replacement flanker) crashing over.

French flyhalf Frederic Michalak, in for the injured Pat Lambie, scored 19 points as The Sharks scored a solid 34-20 victory over the Toyota Cheetahs in the Free State Stadium in Bloemfontein on Saturday afternoon.

The Sharks were full value for this win as they entrenched their position in the top six of the combined Vodacom Super Rugby log. They outscored the home team by four tries to one and collected their fifth try-scoring bonus point of the season – one less than the Hurricanes, who lead this category with six in 2012.

The Toyota Cheetahs will not be satisfied with their performance. They made too many errors and Michalak’s try, late in the first half, was a direct result of the home team’s defenders not showing enough urgency in falling back to collect a high kick by The Sharks.

When Springbok flyer Lwazi Mvovo crossed for The Sharks’ third try on the stroke of half time, the visitors were leading by 21-14, with the Toyota Cheetahs holding on thanks to penalty goals because of ill-discipline by the KwaZulu-Natalians.

Only one try was scored after the break when Meyer Bosman crossed against his former team-mates in the 73rd minute. The Toyota Cheetahs tried their best to dismantle their opponents in this time, but The Sharks’ defence held firm – despite playing without Bismarck du Plessis, who was yellow carded in the second half – and they left Bloem with a maximum of five log points.

Despite another second half slump, the DHL Stormers moved back into pole position on the Vodacom Super Rugby log following their 19-13 win over the Waratahs at DHL Newlands in Cape Town on Saturday evening.

It would’ve been frustrating for the fans of the team from Cape Town, but they are still on the winning track and showed in the first half what they are capable of. Furthermore, conditions deteriorated in the second half, which made constructive attacking play very difficult.

First half tries by Joe Pietersen and Tiaan Liebenberg saw the DHL Stormers go into the break ahead comfortably by 16-3, but like last week against the Toyota Cheetahs, their opponents came out stronger in the second half.

Rob Horne scored early for the Waratahs and after a penalty goal by Brendan McKibbin, the score was suddenly 16-13. But Peter Grant added another three-pointer for the DHL Stormers and for the last half hour the scorers weren’t troubled.

The DHL Stormers’ defence was again rock solid, but their tactical kicking can probably improve. However, they bagged the points and will head to Durban next week as the pace-setters in the competition.