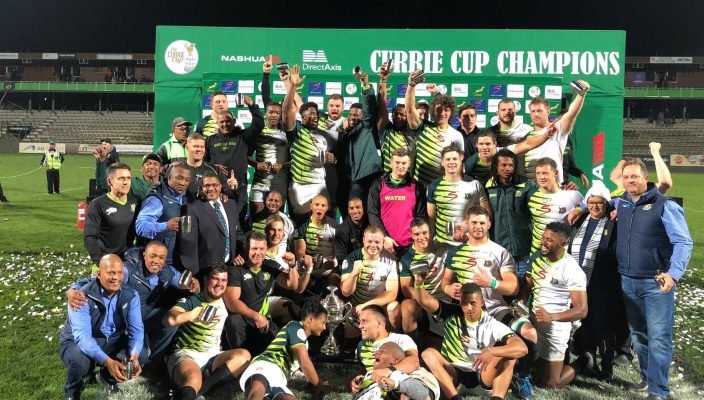 A hat-trick of tries by SWD Eagles No 8 Wayne Wilschut paved the way for the team from George to win the Currie Cup First Division title for the first time in more than a decade in a thrilling final against the Hino Valke at Outeniqua Park on Friday night.

The Hino Valke laid a good foundation in the first half as they ran in three tries to two by the hosts thanks to their enterprising attack, but the hosts staged a spirited second-half fightback to the delight of their passionate fans to seal the victory, by 36-27, to clinch the title for the first time since 2007.

SWD Eagles captain Jacques Vermaak praised his team’s commitment to secure the victory in the competition sponsored by Nashua and DirectAxis Financial Services.

“I am exceptionally proud of the players,” said Vermaak.

“We were a little rusty in the first half and we allowed them to break through the defence.  But we got together half time and decided as a group that we have 40 minutes to win the title, and backed ourselves and did it.”

The Eagles struck first in the fifth minute with a try Wilschut, who gathered the ball from a scrum and powered his way through the defence to hand the team a 5-0 lead.

This was cancelled out almost immediately by Valke scrumhalf Anrich Richter, who stepped his way to through to the tryline, with his successful conversion pushing them 7-5 ahead.

The hosts hit back minutes later as Wilschut touched down for his second five-pointer, which Divan Nel converted before adding a penalty goal to nudge them into a 15-7 lead.

This, however, was short-lived as the Hino Valke’s Etienne Taljaard scored back-to-back tries thanks to a spell of strong running and support play by the visitors, which Richter followed up with a penalty goal on the stroke of halftime for an encouraging 27-15 lead.

The SWD Eagles fought back with intent in the second half using their strong forwards, and this paid off as Wilschut dived over for his hat-trick in the 13th minute after several minutes of camping in the opposition’s half.

They continued to show patience on attack as the half progressed and the rewards followed as Marlo Weich and Wynand Grassmann touching down within minutes of one another, while Nel slotted both conversions over to push them into a 36-27 lead with a little over 10 minutes to play.

The dying minutes were tightly contested, but the SWD held their nerve to seal the victory.