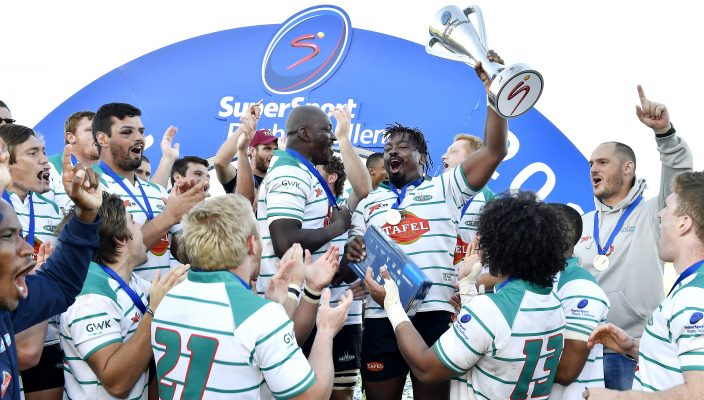 The new champions held a 16-8 lead at the break and always seemed to have the edge on their opponents, responding every time the Pumas got points to close the deficit.

The win will be a very sweet one for the team from Kimberley, who were losing finalists in 2017 (to DHL Western Province) and 2018 (to Pumas) and handed coach Brent Janse van Rensburg a first title since joining the Kimberley team from Pumas, where he was coach when they won it last year.

For Khwezi Mona, Tafel Lager Griquas prop, it was also a second consecutive SSRC title, having moved to Kimberley for the 2019 season.

“It feels great. In a way, I feel for my old team mates, but I am very happy for the Griquas team. The squad have the same mind set and we want to achieve things together as a group,” Mona said.

“These guys are the salt of the earth, they just want to work hard for each other. I am very proud to be part of this squad.”

The prop said the game was won in the opening 20 minutes.

“We knew if we could repel them in those opening moments, they will not build up the momentum that made them such a dangerous team. I am just happy that things worked out well for us. Our supporters have been great this year and now we have given them something to celebrate.”

In the match Tafel Lager Griquas captain and flyhalf George Whitehead was in immense form, marshalling his backline superbly while making pinpoint kicks throughout, while three penalties and two conversions gave him a 13 point haul.

But it was Mona who took the plaudits putting in a monumental effort up front while making a number of carries and tackles to deservedly claim the man of the match award.

It was a back-and-forth first half, but the Tafel Lager Griquas started and ended it more strongly to carry a comfortable eight-point lead into the break.

Whitehead started the scoring with a penalty for a 3-0 lead after seven minutes. The Pumas were then rewarded for their good play in the 21st minute with a penalty in front, which flyhalf Chris Smith slotted to draw the scores level.

Tafel Lager Griquas however hit back three minutes later as Anthony Volmink slipped through the defence and over the line untouched for a try near the left-hand corner, with Whitehead slotting the conversion to go 10-3 up.

The Pumas then came back again when fullback Devon Williams sprinted away to score in the right hand corner. Smith missed the tricky conversion leaving them two points adrift at 10-8.

Two successful penalties in the final six minutes of the half, thanks to a massive scrum from the Tafel Lager Griquas and then a breakdown infringement allowed Whitehead to push his team into a 16-8 lead at the break.

The second half was an exciting affair with both sides throwing caution to the wind, but some great defence kept both sides out.

The Tafel Lager Griquas however went further ahead in the 54th minute after earning a penalty in the Pumas half, Whitehead kicked the ball to touch deep into the Pumas 22m, where from the line out they secured the ball and mauled it over the line with hooker AJ le Roux dotting down.

Whitehead’s only miss of the match left the score at 21-8.

The Pumas then fought their way back into the game with a try in the 67th minute as Williams got a second.

The Tafel Lager Griquas finished the match strongly when replacement-back Eduard Keyter finished a move in the corner and Whitehead add the conversion to seal an impressive victory.

•De-Jay Terblanche became the most capped front-rower in the history of first class rugby in South Africa and played in his 192th match at prop on Sunday.