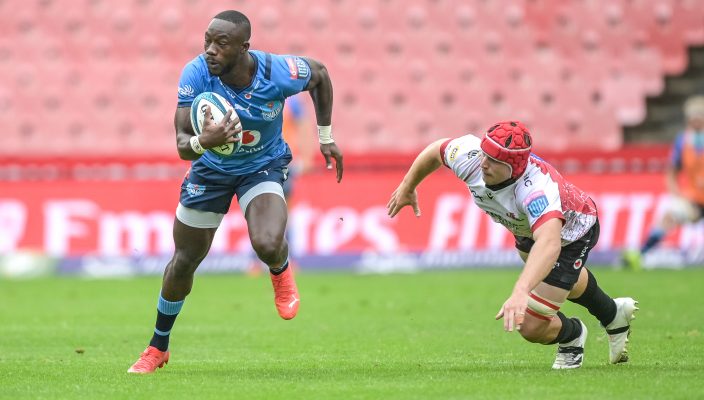 Tambwe focused on serving his team

Madosh Tambwe says the biggest growth area in his own game in this Vodacom United Rugby Championship has been shifting the focus off his individual performance and pouring his energy into serving his Vodacom Bulls team as best as he can.

“It’s never an individual thing for me. As I’ve grown, I’ve come to realise that the more my mindset is shifted towards just going into a game and being the best version of myself I can be to help the team, that’s far better for me than focusing on individual goals. That has helped me tremendously. I would rather shift my focus and energy into thinking more how I’ll serve my team and be the best person and have that impact on the field, than just focusing on scoring or being Man of the Match or having the best stats at the end of it,” said the Vodacom Bulls winger.

As the Vodacom Bulls head into the business end of the competition and the pressure increases, Tambwe says he’s using the challenge to keep growing and building on what has been a terrific season for him.

“The last time I was involved in a situation like this was when I was still playing with the Emirates Lions in 2018 and we were in the final of Vodacom Super Rugby against the Crusaders in Christchurch. For me it’s challenging, and I see it as a positive. Now we’re getting to the business end of the competition, and I’m really excited for the challenge that lies ahead.

“The beauty of this competition is that you play against international players week in and week out. You need to be as consistent as possible. You need to do your homework really well. One week you’re playing against a club with all the Italian internationals in it, the next week it’s a team loaded with Welsh internationals, and then Irish internationals. It poses a different challenge every week and your mindset is tested.

“I’m absolutely thrilled with how my own game has grown. The Vodacom Bulls coaching staff have been immense in terms of challenging me as a player. And my teammates have contributed so much to the great rugby I’ve been playing. They’ve given me the opportunity.”