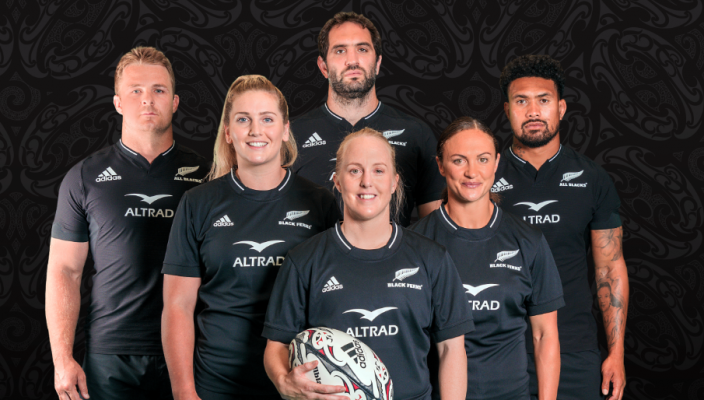 New Zealand Rugby (NZR) has revealed new playing and training kit for its Teams in Black to mark the start of its six-year partnerships with Global Partner ALTRAD and Performance Partner INEOS.

Designed and tested by NZR’s Principal Partner adidas, the playing jersey will have the same world-leading design and technology as 2021, and feature ALTRAD as the Official Front of Jersey Sponsor and INEOS as the Official Sponsor of the Back of Playing Shorts and Front of Training Jersey.

“It’s great to kick off the year alongside new Global Partners ALTRAD and INEOS, these partnerships provide a real opportunity for us to grow our presence internationally,” NZR Chief Executive Mark Robinson said.

“ALTRAD is a World leader in their Group’s sector and demonstrate a passion for growing rugby in communities globally. With ALTRAD as the Official Front of Jersey sponsor, we hope to inspire and deepen connections with these communities through our shared passion for rugby.”

All Blacks Sevens Head Coach Clark Laidlaw added: “With a mix of world class talent and emerging players named in the All Blacks Sevens squad earlier this month, we are looking forward to making the most of opportunities to develop as a team. The Performance Partnership with INEOS is really unique, giving us the ability to learn from some of the world’s highest performing teams across a range of sports.”

Mohed Altrad, Founder and President of ALTRAD said: “2022 marks the start of an exciting new era for ALTRAD Rugby with the logo first appearing on the iconic New Zealand jerseys. As proud partner of three unique rugby properties in the rugby world, ALTRAD is using the opportunity of these rugby partnerships to help make a positive difference – to its colleagues, customers and communities around the world. Everyone at ALTRAD wishes all New Zealand Rugby’s teams the best of luck this year.”

Sir Dave Brailsford, Director of Sport, INEOS said: “The Teams in Black are synonymous with performance, and their kit is one of the most evocative and admired in world sport. The integration of the INEOS brand on this iconic kit symbolises our partnership to share best practice and collaborate on performance innovation – a core purpose of INEOS. We have much to learn from the Teams in Black, and much to share from our own successes in F1, cycling, sailing, football and running. The INEOS sports group is united by a resolve to set new standards in everything it does. Our exciting new partnership with New Zealand Rugby perfectly complements this ambition, and enhances an already impressive knowledge base. I am looking forward to integrating the players and team at New Zealand Rugby into INEOS to support their ambitious performance goals and apply the knowledge and expertise found across all of our teams.”

ALTRAD will become one of a select few partners to take up the position of Official Front of Jersey Sponsor for the Teams in Black, as Global Partners to NZR, with a smaller, faded logo also sitting subtly on the back under the thin white collar. INEOS will feature on the playing kit for the first time as sponsor the Back of Playing Shorts and Front of Training Jersey for all Teams in Black, a key part of their Performance Partnership with NZR. The latest Teams in Black range will be available for purchase later this year.

ALTRAD is a World leader in industrial services and construction equipment. Its multidisciplinary activities include engineering, mechanical and specialised services as well as access solutions, insulation and painting. Headquartered in France, ALTRAD employs around 42,000 people across the world.

ALTRAD is also Major Partner of the French National Teams (FFR) as well as owner of the MHR [Montpellier Hérault Rugby Sport Club], and alongside its latest partnership with the NZR, ALTRAD is championing rugby’s ability to connect communities, cultures, and fans with the aim to “build a future, together”.

About INEOS in Sport

INEOS brings together some of the best minds and talent in global sport across Formula One, cycling, sailing, football, running and now rugby. Working together, the teams are able to unlock performance gains to support their ambitions on the track, road, water and pitch helping extraordinary athletes achieve extraordinary things.

INEOS is a global manufacturing company making the raw materials and energy used for everyday life. Used across industries such as food, medicine, home, electronics and automotive, our products aim to enhance standards of living for everyone around the world.

Improving the sustainability of our business and operations is central to the way we work. It is of critical importance to our employees, to our partners and customers, to the communities in which we operate, and to our investors. It drives innovation across all our businesses and sites.

Our products already make an indispensable contribution to society by providing the most sustainable options for a wide range of societal needs. For example, preservation of food and clean water; construction of wind turbines, solar panels and other renewable technologies; for construction of lighter and more fuel-efficient vehicles and aircraft; for medical devices and applications; for clothing and apparel; and for insulation and other industrial and home applications. If polymers and plastics were to be replaced to the maximum extent in applications where they can be substituted, overall life-cycle greenhouse gas (GHG) emissions in Europe would increase by more than 50%.

Following the Paris Climate Agreement of 2015, most nation states have set the goal to achieve a net zero emission economy by 2050, and are adopting regulations and legislation to support this. As part of this, there is widespread acceptance that we should strive for a circular economy, in which materials are re-used to their maximum extent. In response, INEOS businesses have put in place the plans and actions needed to ensure that they lead the transition to a net zero economy by no later than 2050, whilst remaining profitable, and staying ahead of evolving regulations and legislation