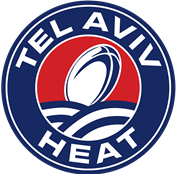 Among the Tel Aviv Heat 38-man squad are a few familiar and well-known South African rugby players will be donning the Heat jersey as they face some of the Blue Bulls Rugby Union’s most vibrant, young, and upcoming rugby stars.

“It is truly fantastic to be able to be invited by the Blue Bulls to tour and give our talented squad exposure in one of the world’s strongest rugby playing regions,” said an elated Musikanth. “This will be an amazing momentum-builder for our Tel Aviv Heat as we prepare for the upcoming Rugby Europe Super Cup season.

The Tel Aviv Heat was launched in July 2021. CEO Pete Sickle emphasis the Israeli “start-up” culture that exists within the very value system on which the Tel Aviv Heat are built.

“This is a very exciting time for the Tel Aviv Heat franchise,” said Sickle. “We incorporate and leverage the Israeli “start-up” culture which includes creativity and innovation in everything we do and embark on. The main drive and focus are to elevate and advance the game of rugby in Israel by connecting rugby fans from all across the world by following an all-inclusive approach and promoting diversity within the team. For now, Tel Aviv Heat can be viewed as the underdog, but we are on the journey to showcase just how great we are and will be.”

President of the Blue Bulls Rugby Union, Willem Strauss embraces the approach both teams are taking to advancing the game not only giving the Tell Aviv Heat players are chance to play at one of South Africa’s most iconic venue, Loftus Versfeld, but also for the Blue Bulls Rugby Union to unearth and give a platform to their club and amateur rugby players to test themselves against some talented and skilled opposition.

“This is a great opportunity to reward the best semi-professional players in the Bulls club structures, and we are excited to welcome a team like the Tel Aviv Heat to Pretoria.” said Strauss. “Club rugby is a priority for not only for our administration, but for everyone at the Blue Bulls.”