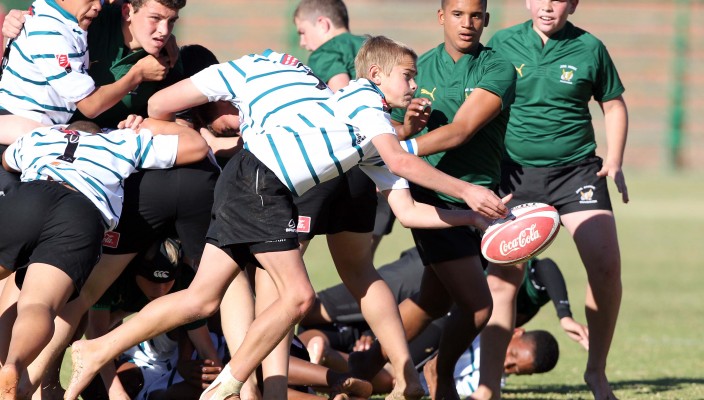 The Coca-Cola Under-13 Craven Week delivered another gripping day of action at Warmbad Hoȅrskool in Bela-Bela on Tuesday as the tempo and quality of rugby rose to a new level with the teams settled in and the nerves forgotten.

For South Western Districts, the Limpopo Blue Bulls, Free State and Boland day two marked a significant step in establishing themselves as forces to be reckoned with thanks to encouraging victories which made up for their disappointing starts to the tournament on Monday.

Western Province, the Pumas, Blue Bulls and Lions meanwhile continued their winning ways as they delivered solid performances to top the unofficial log as the only unbeaten teams with two days of matches remaining.

Such was the high quality of the performances South Western Districts, the Pumas, Free State and Griffons registered bonus-point victories, with the Free State’s Rocco Steyn and Thabo Mlambo of the Griffons scoring hat-tricks of tries.

Unfortunately for KwaZulu-Natal, the determined Boland side had the upper hand as they used their pace and fine skills to make the most of their chances for a 13-7 victory and the upset of the day, while visitors Zimbabwe and Namibia again struggled to make their presence felt forcing them to settle for their second round of defeats.

South Western Districts set the tone for the day early in the morning as they ran circles around Griquas and took advantage of the gaps in defence, which earned them four tries and a 22-5 victory.

Hosts, the Limpopo Blue Bulls, also discovered their form after a heavy defeat against KwaZulu-Natal on Monday by showing a new-found confidence on attack and a tighter defensive effort, which earned them a 22-5 victory against the Valke to the delight of the crowd.

In a fitting end to the day the Blue Bulls beat the Leopards 14-0 in a hard-fought encounter after a 0-0 deadlock at the break, while the Lions also showed their mettle in an arm-wrestle of a clash against Border for a 18-5 win.

Two tries by the Blue Bulls in the third quarter pushed the team into the lead against the Leopards, which was sufficient to seal the victory despite a tightly-contested fourth quarter.

In the Lions camp, meanwhile, two first-half tries to only one by the Leopards handed them a 15-7 lead and a psychological edge in the physical clash. With the forwards continuing their dominance in the second half and the side doing well to pin Border in their own half, the Lions increased their score to 18 points in the third quarter thanks to a penalty by fullback Muzilikazi Manyike to secure their second victory in as many matches.

The players will have tomorrow at leisure to rest ahead of the final rounds on Thursday and Friday.

Day 2 at Coca-Cola Under-13 Craven Week