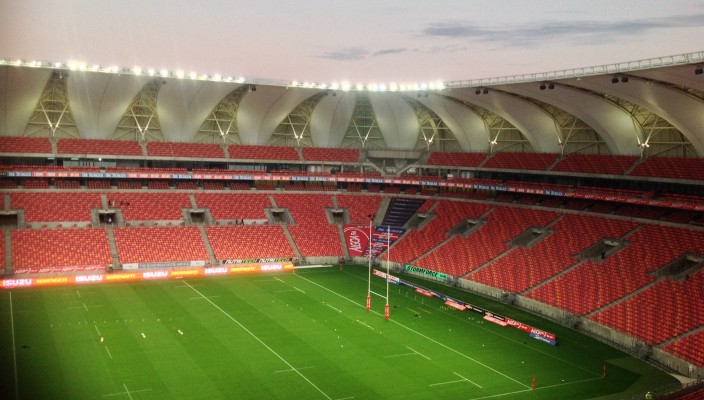 Confirmation by SA Rugby last week that the Eastern Province Rugby Union will host the third test match against Current Six Nations champions Ireland has added to what was already going to be a bumper 2016 rugby season.

SARU announced on Friday that the third leg of the Castle Lager Incoming Series against Ireland would take place at the Nelson Mandela Bay Stadium on the 25th of June next year.

“The Test Match is an exciting addition to what was already going to be a bumper 2016 rugby season with the scheduled return of the Southern Kings to Super Rugby in February,” said EPRU Executive member, Vernon Stuurman.

“This is yet another feather in the cap of EP Rugby, which has hosted a number of international rugby tests as well as the South African leg of the World Rugby Sevens tournament for four years, since our relocation to the Nelson Mandela Bay Stadium,” he said.

“The fact that SA Rugby has awarded this test match to EPRU for next year is also a vote of confidence from the national body in the ability of all the stakeholders involved to provide the necessary infrastructure and support for such a major event,” he said.

EPRU hosted the first ever sports match at the stadium in 2009, when the Southern Kings played the British and Irish Lions in front of 36,000 people. Since then EP Rugby has hosted Test matches between South Africa and New Zealand in 2011, SA and England in 2012 and SA vs Scotland in 2014. They also hosted a friendly between the EP Kings and Wales last year.

Stuurman said the Test would have a significant positive economic impact for the Eastern Cape region and encouraged the residents of Nelson Mandela Bay and surrounds to come out in their numbers to support the event and help fill the stadium.

“Based on independent economic assessments the previous international events EP Rugby have hosted have generated in excess of a R1 billion for the region’s economy,” he said.

Stuurman said based on these assessments, a Test Match for the region could be expected to have an economic impact in excess of R150 million and create over 700 jobs.

“This does not even include the positive international exposure that is generated for the region as a sports tourism destination,” he said.