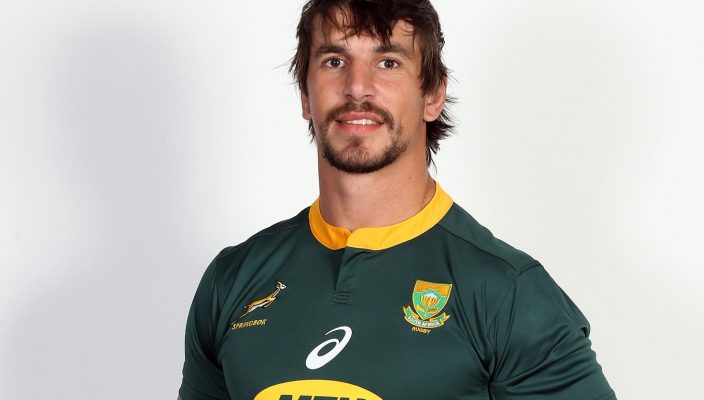 The Sharks are thrilled to announce a major coup with the signing of Springbok second rower Eben Etzebeth, who will join our franchise from Toulon once the French season has ended.

Etzebeth will join up with The Sharks in July of this year and he has been signed on a long-term contract until 2027.

Following on the heels of other major international signings in the past two years, reflecting The Sharks desire and commitment to being a global force in rugby, Etzebeth’s return to South Africa, and to The Sharks, is a huge statement about the attraction the Durban side holds to players of repute.

“Attracting a player of Etzebeth’s calibre underlines the importance The Sharks place on building a winning squad, which is aligned to the vision of being the biggest franchise in world rugby,” said The Sharks CEO Dr Ed Coetzee.

“We’re also focused on building a strong group of players for a number of years, not just the immediate future and Eben’s long-term contract reflects this.

“We want to create a winning culture here at The Sharks across the board and from a team perspective, bringing players who have achieved at the highest level helps in our goal of achieving this.”

The 30-year-old, nearing 100 Test matches for the Springboks in a decade long international career, including 13 in Rugby World Cups, will bolster a Cell C Sharks pack that has really begun to dominate and his physicality and bruising nature, so important in the second row, will no doubt add to the heights the forwards are striving to achieve.

“I’m looking forward to coming to The Sharks and living in Durban and I expect this to be a wonderful chapter in my career.”

He admits that returning to South Africa after spending a few years overseas was a big motivation.

“Family and being closer to home was a big motivating factor, as well as being able to represent a great team like the Cell C Sharks.

“I can see things are happening there, Siya [Kolisi] is there and we’ve been friends since were in the provincial Under 19s together and now we will get to play for the Sharks together. Along with my Springbok team-mates Bongi Mbonambi, Makazole Mapimpi, Lukhanyo Am, Thomas du Toit, all guys I know well. I’m also really excited to meet a few new guys.”

He added that playing home games at Hollywoodbets Kings Park also excites him.
“I’m looking forward to playing at The Shark Tank, the local derbies against the Bulls, Stormers and Lions will be awesome. I’m looking forward to being back in South Africa and playing in front of the Sharks fans there.”

While The Sharks make no secret of their excitement to announce this major acquisition, it appears to be a two-way street and Etzebeth admitted that he was just as excited to play in Durban. He explained that he did his homework on the team that was courting him, speaking to some of the players here already.

“I chatted to Siya, I gave Thomas a call and chatted to them. Off the field, things work, on the field we can see things are working and the team is doing well, I enjoyed watching the last game against the Bulls and the victory away from home and this is a brand I definitely want to be associated with and which I’m proud to be joining.”