The Rugby Championship 2012 – Round One Wrap 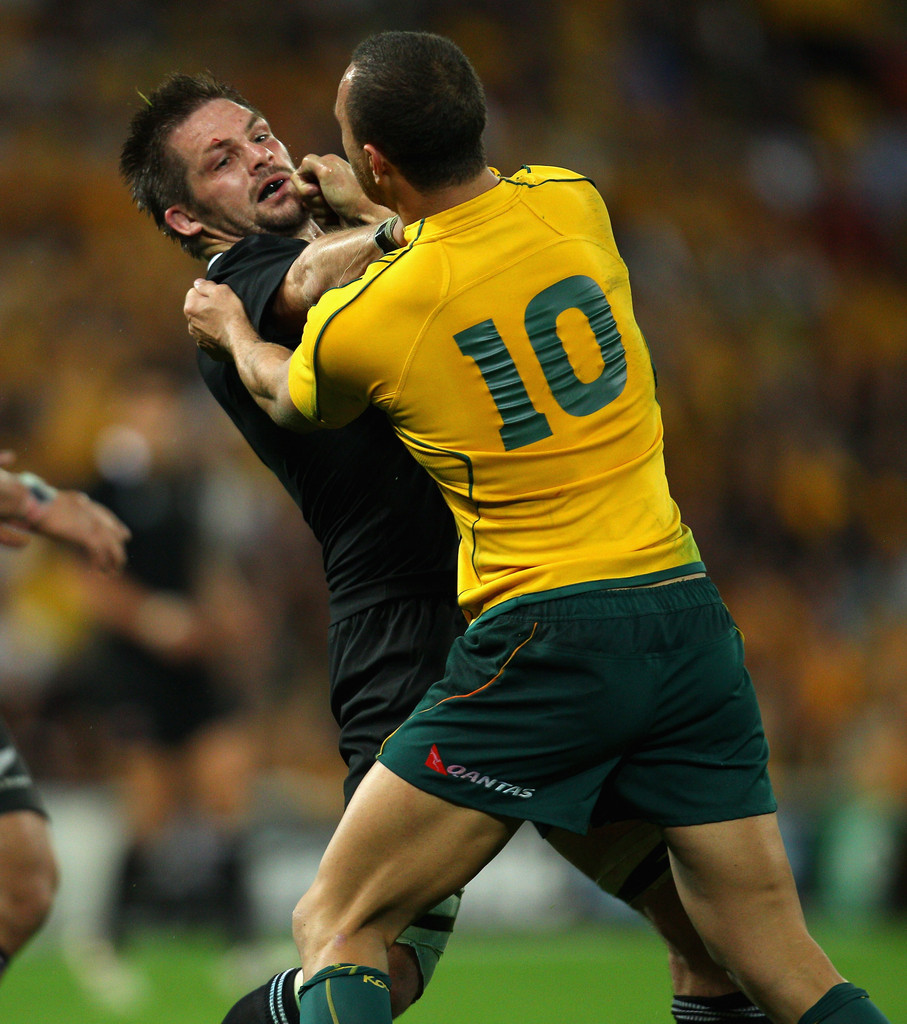 Richie McCaw and Quade Cooper involved in a scrap in 2011. Photo by Getty Images.

The Rugby Championship was kicked off in Sydney and Cape Town over the weekend, with New Zealand defeating Australia 27-19 at ANZ Stadium, while South Africa accounted for South Africa 27-6 at DHL Newlands.

While the Pumas lost their first match, a statistic achieved by each of the three original Tri-Nations teams in the previous rendition of the tournament, it was a historic occasion for Argentine rugby and the national team, kicking off a competition against the top-three teams in the world.

“Years of planning narrowed down to the Pumas’ debut in The Rugby Championship over the weekend, and there was a buzz around Newlands as the South Americans made their entry into arguably the world’s toughest international tournament,” Peters said.

“The Pumas will relish the return match on home soil in Mendoza this weekend, and know that regardless of the result, there were many happy Argentinean supporters after watching their team take on the 1995 and 2007 Rugby World Cup champions.”

In Australia the first match of the Bledisloe Cup kicked off, with the famous trophy running alongside The Rugby Championship in fixtures against the Wallabies and All Blacks.

“Stakes were also high in Sydney, where the reigning World Champions took on the last team to win the Tri-Nations, and a bumper crowd of 76,877 were on hand to witness what is always an absorbing contest,” Peters said.

“Heading to Eden Park for the return clash, the scene of the All Blacks World Cup success, will see a full house witness the second trans-Tasman clash of The Rugby Championship.”

Sydney saw just six survivors of the last Wallabies team to play the All Blacks, while the visitors had no less than 12 World Cup winners in their starting team.

Looking to avoid a three-match losing streak in Sydney against the All Blacks, the Wallabies were behind 10-18 at halftime, but while a 9-8 second half to the World Champions might have given them the match, it ensured that despite being behind for most of the match, were able to show glimpses of competitiveness.

The All Blacks return to Auckland with their only concern being loosehead prop Tony Woodcock, who took a knock to his ribs, but for the Wallabies the news is much worse.

Captain David Pocock has been ruled out of The Rugby Championship, meaning that a third Australian captain will take control of the team in 2012, with Reds halfback Will Genia to lead his team out onto Eden Park this weekend.

Argentina had a strong team on display, although Juan Martin Hernandez played South African style kicking tactics early, but while they showed defensive heart throughout the match, the words of ‘consultant coach’ Sir Graham Henry reared, with the Pumas unable to get their attack to click when they had the Springboks under pressure.

Henry remarked that if the Pumas could “score more tries”, then they would be successful in The Rugby Championship.

Still, while their offence might not have yielded a try, they did manage to ensure that the Springboks did not cross for a fourth try, denying them a crucial bonus point – which the All Blacks did to the Wallabies with Dan Carter’s penalty in the last minute.

South African hooker and enforcer Bismarck du Plessis has been ruled out for the season after the match, resulting in a call up for fellow Sharks forward Craig Burden.