The Rugby Championship Round Four Preview – Australia vs Argentina 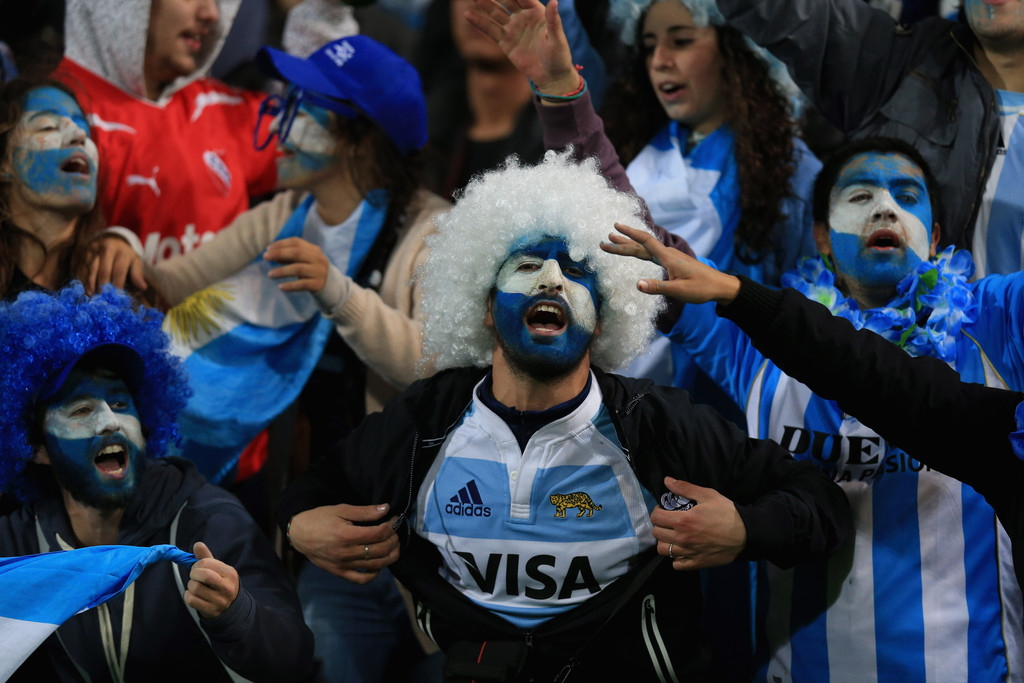 The Wallabies and Pumas haven't faced each other since the 2003 IRB World Cup - Pumas fans are ecstatic at the prospect of facing the men from Down Under. Photo by Getty.

The Wallabies will play the Pumas for the first time in The Rugby Championship this weekend, the first match between the two countries since the 2003 Rugby World Cup.

Australia were able to win that match 24-8, despite the solitary try of fullback Ignacio Corleto, although the Stade Francais back was the hero four years later, where he scored a try against Les Bleus in each of the Pumas wins over the 2007 World Cup hosts.

That Pool A Rugby World Cup match, Argentina’s last battle against Australia, was also notable for the fact that a young Juan Martin Hernandez sat on the bench, while current Pumas coach Santiago Phelan started at blindside flanker that day.

Of the Wallabies, only Nathan Sharpe will suit up for action again nine years later, wearing the captain’s armband no less.

The 2011 Tri-Nations champions recorded their maiden win of The Rugby Championship in Perth during Round Three, defeating the Springboks 26-19, a welcome respite after losing back-to-back test matches against the All Blacks.

The hosts overcame a ten point deficit early in the match, winning thanks to tries from Scott Higginbotham and Ben Alexander in the second half, with the visitors only able to score via Bryan Habana – which was his fifth try in Perth in three appearances.

Wallaby coach Robbie Deans felt that his team’s success came from putting into practice aspects that weren’t evident against the All Blacks a fortnight ago.

“We spent a little bit longer with the ball and ran some good lines both side of the breakdown, got in behind the shoulders, which is key when you’re playing these blokes,” Deans said.

Argentina continued their initiation into arguably the toughest international rugby championship in the world with their first match against the World Champion All Blacks, since facing them at the 2011 Rugby World Cup last year.

While the All Blacks eventually won 21-5, it was a tough battle, and tough openside flanker Juan Manuel Leguizamon lamented how the Pumas dropped off at times.

“We play at a good level for more than 60 minutes, creating much pressure while we disrupted their systems (but equally), we made certain errors that they knew how to take and record two tries.

“In the second half we did not have possession of the ball, and they managed to seize the opportunity and we could not contain them.”

The Pumas hosted the Wallabies in a full test match in Buenos Aires in 1979, and claimed an impressive 24-13 victory, and four years later the Argentineans won 18-3 in Brisbane, with Ballymore privy to a matchup between Mark Ella and Hugo Porta – the latter who contributed ten points in the two tries to nil win.

Australia won the return match in Sydney, and since then have lost in 1987 and 1997, both times in Buenos Aires, although the Wallabies boast a four match winning streak stretching back to 2000.

The Wallabies have been rocked with the news that captain Will Genia has been ruled out for the remainder of The Rugby Championship, meaning veteran lock Nathan Sharpe will become Australia’s fourth captain this year.

Kurtley Beale has been dropped to the bench, while Kane Douglas comes into the second row to replace the injured Sitaleki Timani, while halfback Nick Phipps will earn his fifth test cap in just his second run on appearance for the Wallabies.

Sharpe was proud to lead his country.

“To have the privilege of leading Australia in the first ever Test to be played on the Gold Coast is an experience I will always treasure,” he said, captaining the Wallabies for the third time.

Argentina coach Santiago Phelan has made two changes to his starting line-up for Saturday’s Rugby Championship clash against Australia, both in the backline.

Lock and vice-captain Patricio Albacete has been named to play his 50th Test, the only note in a pack that is unchanged after matching the All Blacks for long periods last week.