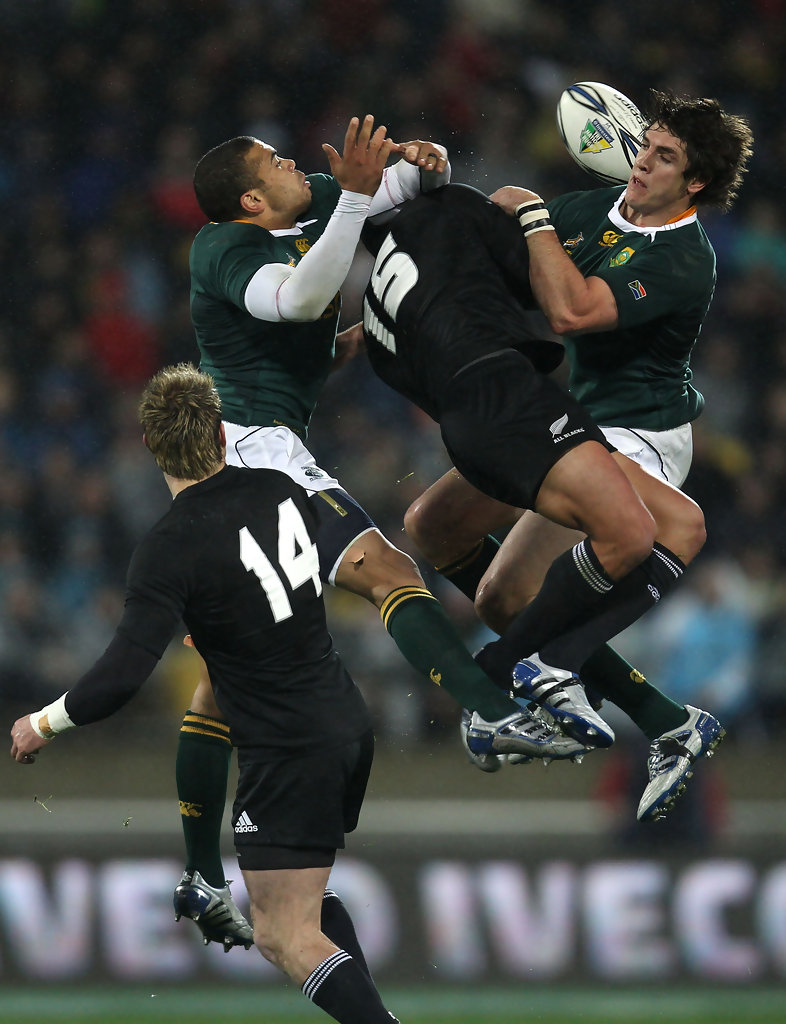 Bryan Habana and Jacque Fourie contesting a high against the All Blacks in last years Tri-Nations. Photo by Getty.

The World Champion All Blacks will face up to arguably their greatest rivals as they face the Springboks for the first time in The Rugby Championship, and a victory to the current ladder leaders could give them a commanding lead at the top-of-the-table.

The Springboks 26-19 loss to the Wallabies meant that they have recorded one win, draw and loss in the opening three rounds – and the South Africans would dearly love to make their mark in the Championship by repeating the feats of their last visit to Dunedin.

While this will be their first visit to Forsyth Barr Stadium, the Springboks last visit to the Deep South and the now defunct ‘House of Pain’ (Carisbrook) in 2008 saw them record their maiden triumph there since first clashing with the All Blacks in Dunedin back in 1921.

The All Blacks have won three from three so far, defeating the Wallabies in Sydney and Auckland to retain the Bledisloe Cup, before having to survive a tough examination from the Pumas to record a 21-5 win and open up a five competition point lead over the second placed Springboks – whose seven point loss saw them gain the first bonus point in The Rugby Championship.

When the heavens opened in Wellington prior to the All Blacks match against the Pumas, there may have been some thoughts that the wet weather capable New Zealanders would be too strong, but if there is one team that had the weaponry to play in such conditions – it is Argentina.

All Blacks coach Steve Hansen recognised this as he was disappointed at the lack of respect his troops gave the ball at times.

“But part of that was the intensity the Argentineans brought. They’re a welcome addition to this competition. In years to come we’re going to look back on this first year and say this is the beginning of something new.”

The Springboks arrived in Perth, with three wins from six tests there, with some confidence, and a 13-3 early lead gave the indication that the visitors control would be too much for the Wallabies.

Yet the hosts remained composed and scored two tries in the back end of the match, and while Springboks coach Heyneke Meyer said there were improvements, he felt that final quarter his team took the foot off the pedal.

““We played better in most areas, against a quality side, than we did against Argentina,” he said.

“I thought we got enough quick ball but in the second half their defence was right in our face, they really defended well.

The All Blacks first hosted the Springboks in 1921 and the three test series was drawn (1-1-1) and the 1928 four test series in South Africa was again tied (2-2), and this began a celebrated rivalry that many rugby writers mused was an ‘unofficial world championship’ every time they played, and certainly the South Africans were a team to boast regular success against New Zealand through the 1900s.

The legendary 1937 Springboks, the only such side to win a test series in New Zealand, were backed up by the 1949 side that inflicted a 4-0 whitewash on the All Blacks.

Indeed the head to head during the amateur era stood in favor of the Springboks, who in 1995 boasted 21 wins to the All Blacks 18, but since then New Zealand has been successful in 28 of the 41 tests played since 1996.

The Springboks 18-5 win in Port Elizabeth last year broke a four match losing streak for the South Africans, and started an All Blacks run of two defeats heading into the Rugby World Cup.

The All Blacks will be without star first five-eighth Dan Carter, meaning that the Chiefs Aaron Cruden makes his second consecutive start.

All Blacks World Cup hero Piri Weepu makes his first run on start of the year, with his strong performance off the bench against Argentina rewarded, meaning that for the first All Blacks test this season Aaron Smith will not wear the number nine jersey.

The 62-test halfback is the only change in the backline, while Sam Whitelock replaces Brodie Retallick in the second row, Liam Messam comes into blindside – now perhaps the frontline New Zealand number six, while Highlanders hooker Andrew Hore gets the chance to start a Test at his franchise’s home ground, ahead of Keven Mealamu.

Retallick, Vito and Mealamu all drop to the bench, while Tamati Ellison replaces Ben Smith in the squad.

The Springboks touched down in Auckland on Sunday before heading to the Deep South, and Eben Etzebeth’s two-week suspension means that there is one forced change to the pack, with Flip van der Merwe in the second row, while in the flanks Bath forward Francois Louw is starting.

His inclusion was quoted as being a deliberate attempt to combat the All Blacks ‘on the floor’.

Marcell Coutzee drops to the bench, with Dean Greyling, Andries Bekker and back Juan de Jongh being the other alterations in the reserve bench.