The Rugby Championship Round Three Preview – All Blacks vs Pumas 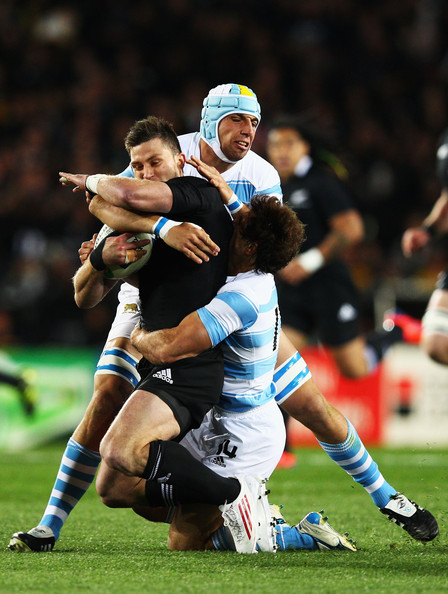 Cory Jane of the All Blacks getting tackled by Leonardo Senatore and Gonzalo Camacho the last time these two sides met in the quarter-final of the 2011 RWC. Photo by Getty Images.

The World Champion All Blacks will take on Argentina, competition debutants and third place winners at the 2007 Rugby World Cup, in round three of The Rugby Championship – and first Championship match for the Pumas in Australasia.

The hosts are sitting unbeaten on top-of-the-table, having defeated the Wallabies 27-19 in Sydney and 22-0 in Auckland, and with the Bledisloe Cup in hand, many feel that the winner of ten Tri-Nations titles could be warming to their task.

The match was also notable for being the last appearance of Sonny Bill Williams in an All Blacks jersey, although backs coach Ian Foster said they had a handy replacement in Conrad Smith.

“It’s great to have him back,” Foster said.

“He’s a quality player. As I’ve said earlier I think he was the best player in the country during Super Rugby.  He brings lots of leadership, he brings a lot of experience to the decision making part of the game, particularly in the backs

But first, the All Blacks and the returning Smith must encounter Los Pumas!

Argentina returns to New Zealand for the first time since the Rugby World Cup, eliminated from the quadrennial tournament by the eventual champions, and while they have undertaken the longest travel of any team so far, they will be buoyant after an obvious gradient of improvement – with their 27-6 defeat in Cape Town at the hands of the Springboks backed up by a stunning 16-16 draw in Mendoza.

Achieving their best ever result against South Africa has given them plenty of confidence, and an insight into the Pumas confidence and targets were given as back Gonzalo Camacho and his team-mates felt that they had the Springboks.

“We were so close to winning, it was frustrating,” Camacho said.

“We were committed and we played a good game. We didn’t get the win, but this is a huge step for Argentina rugby. We are very happy about that result, and we made a big improvement from one weekend to the next.”

Tactically this promises to be a great match, for despite a misleading 33-10 score line in their most recent meeting at the quarter-finals in the Rugby World Cup last year, the Pumas patient and organised approach caused some issues before the boot of Piri Weepu and a late try from Kieran Read stretched the final margin.

The home team will miss Brad Thorn and Jerome Kaino up front, evident that evening against the Pumas, while Argentina welcomes back their forward talisman in captain Juan Martin Fernandez Lobbe.

That World Cup clash also missed the country’s two premier playmakers, but both Juan Martin Hernandez and Dan Carter will return this weekend – although the All Blacks first-five eighth did admit some nerves this week.

Wellington was the scene of his tragic groin injury last year that ruled him out of the World Cup.

Hooker Eusebio Guinazu is the only other change from the starting XV that faced the All Blacks back in October 2011, while Santiago Fernandez shifts to 12, replacing veteran Felipe Contepomi, who is not in the Argentine squad.

Along with the return of Smith from his damaged retina, the All Blacks have emptied out their casualty ward with prop Tony Woodcock (rib) and lock Luke Romano (shoulder) cleared for action.

(Please note these are test records only. There were four non-capped internationals before the 1985 test match between the two countries, for your convenience these matches are also listed below)

* Note this match was a POOL B fixture at the 2011 Rugby World Cup, played on 25 September, with Argentina winning 13-12 at Wellington Regional Stadium (ground name from Westpac Stadium changed due to IRB tournament rules).

Matches played prior to first Test in 1985