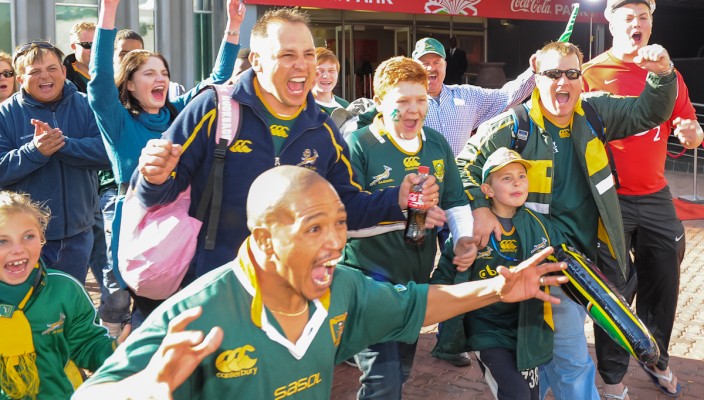 Three changes to Springbok pack to face Samoa in Pretoria

Springbok captain Jean de Villiers will be given until Friday to prove that he has fully recovered from a sternum injury, which has kept him off the training field so far this week.

The Springboks face Samoa in the final match of the Castle Lager Incoming Series at Loftus Versfeld in Pretoria on Saturday. The team shows three changes – all of them in the pack – from the side which beat Scotland by 30-17 in Nelspruit last weekend.

The backline will be unchanged from last weekend, should De Villiers’ pass his fitness test.

If De Villiers can’t play, Jan Serfontein will start at inside centre, with Juan de Jongh coming onto the bench. Adriaan Strauss will then lead the Springboks to become South Africa’s 55th Test captain and Bryan Habana will take over the vice-captaincy.

“Jean is an integral member of our squad and we will give him all the time he needs to get back to full fitness,” said Springbok coach Heyneke Meyer.

“Luckily we have a strong group of leaders in the squad and if Jean doesn’t make it, Adriaan will take over the captaincy, with support provided by Francois Louw, Pierre Spies, Bryan Habana and Bismarck du Plessis.”

Upfront, the injured Arno Botha is replaced at flank by Willem Alberts, who has been struggling with a side strain.

Alberts, who has been training with the team this week, will have to pass a fitness test on Friday to prove that he has recovered fully from his injury. If he is not passed fit to play Samoa, Siya Kolisi will start in his place and Marcell Coetzee will be included on the bench.

Francois Louw returns on the other flank after missing last weekend’s match because of his wedding. The third and final change to the starting line-up is at lock, where Flip van der Merwe comes in for Juandré Kruger.

“Francois was always going to be back this week and Willem has been our first-choice ball carrier, so it’s been good to have them back on the training field,” said Springbok coach Heyneke Meyer.

“Because Willem is returning from an injury, we decided to start with him. Siya played very well last weekend and it is great to have someone of his versatility on the bench. We saw last week how valuable it is to have replacement players who can make a real impact late in the match.

“I’m happy that we’ve been able to keep some form of continuity during these Tests, especially in the backline, where a number of exciting new players have come in and put up their hands during Vodacom Super Rugby and in the last two weeks.”

Meyer said the match against Samoa will be a proper test for his squad.

“They have a strong squad and have benefited from having their best players compete in Vodacom Super Rugby and at the top club level in Europe, but our focus is on putting in an improved performance from last week,” said Meyer.

The Springbok team to face Samoa in Pretoria is: