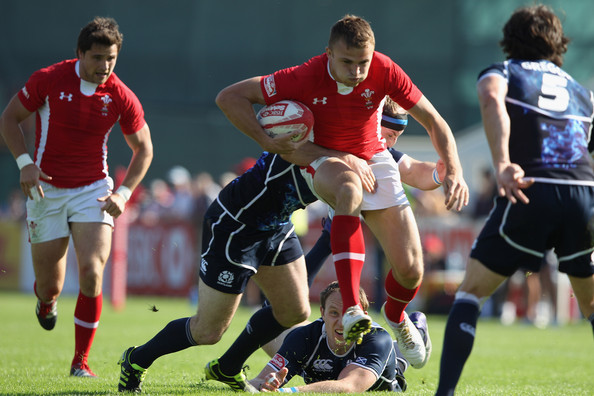 Tom Prydie in action for Wales against Scotland in the U20 Six Nations. Photo by Michael Steele/ Getty Images Europe.

Having stunned the rugby world once already in the 2012 Junior World Championship, wing Tom Prydie is confident Wales Under 20 can reach the final for the first time when taking on New Zealand in the semi-final at Newlands Stadium on Sunday.

The Baby Blacks have dominated the championship, having never been beaten in the previous four tournaments – until Wales recorded a shock 9-6 defeat in atrocious conditions in Stellenbosch during Pool play.

With an earlier 44-18 success over Fiji and a comfortable 74-3 win over Samoa, Wales completed the Pool stages undefeated and as top seeds to secure an automatic route to the semi-finals – and now they find themselves up against the defending champions once again.

“The boys have been training really well and we are all looking forward to it,” said Prydie, who already has four senior Wales caps to his name. “We obviously want to make it all the way to the final and to do that you have to beat the best teams and they don’t come much bigger than New Zealand.

“It would be massive for us if we made the final – none of us have ever been in a World Cup final before and I’m not sure if any of us will ever again be in this position, so it’s a huge opportunity for us as players as well as for Wales.”

Wales enter their first semi-final since 2008 on the back of an 11-try drubbing of Samoa, where Prydie scored two tries, eight conversions and a penalty for a personal haul of 29 points to add to his two, crucial second-half penalties against New Zealand.

“Samoa was another huge game for us. The forwards have really done well in this tournament to lay the perfect platform and the backs have also stood up and scored some great tries.

“The boys were on a massive high after the win against New Zealand but we knew Samoa could have been a potential banana skin so we just had to concentrate on the game plan and just finish it off and make sure we got into the semi-final which we did.”

New Zealand began the tournament as firm favourites and were expected to stroll through the Pool, particularly after hammering Wales 92-0 in last year’s tournament, but Wales caused a huge upset to beat the Baby Blacks and now go into the semis brimming with confidence.

“We did a job against Fiji then the boys trained really well for the crucial game against New Zealand. The weather suited us more than them I suppose but the game plan we went in with was perfect and we managed to get a win before following that up with a good victory over Samoa to reach the semis.

“The New Zealand result was huge – even now I can’t really put it into words. The history they have got, not just at this level but at Sevens and international level; no-one has ever beaten them before in this tournament so it was massive for us but we have to do it all over again this weekend now for it to mean even more.

“Personally, another win would be right up there alongside earning my first senior Welsh cap and scoring my first try for Wales. It’s been a different experience playing with the Under 20s but it’s been an experience I’ve really enjoyed and it’s given me a lot of confidence. Hopefully we can beat New Zealand again and get a place in the final.”