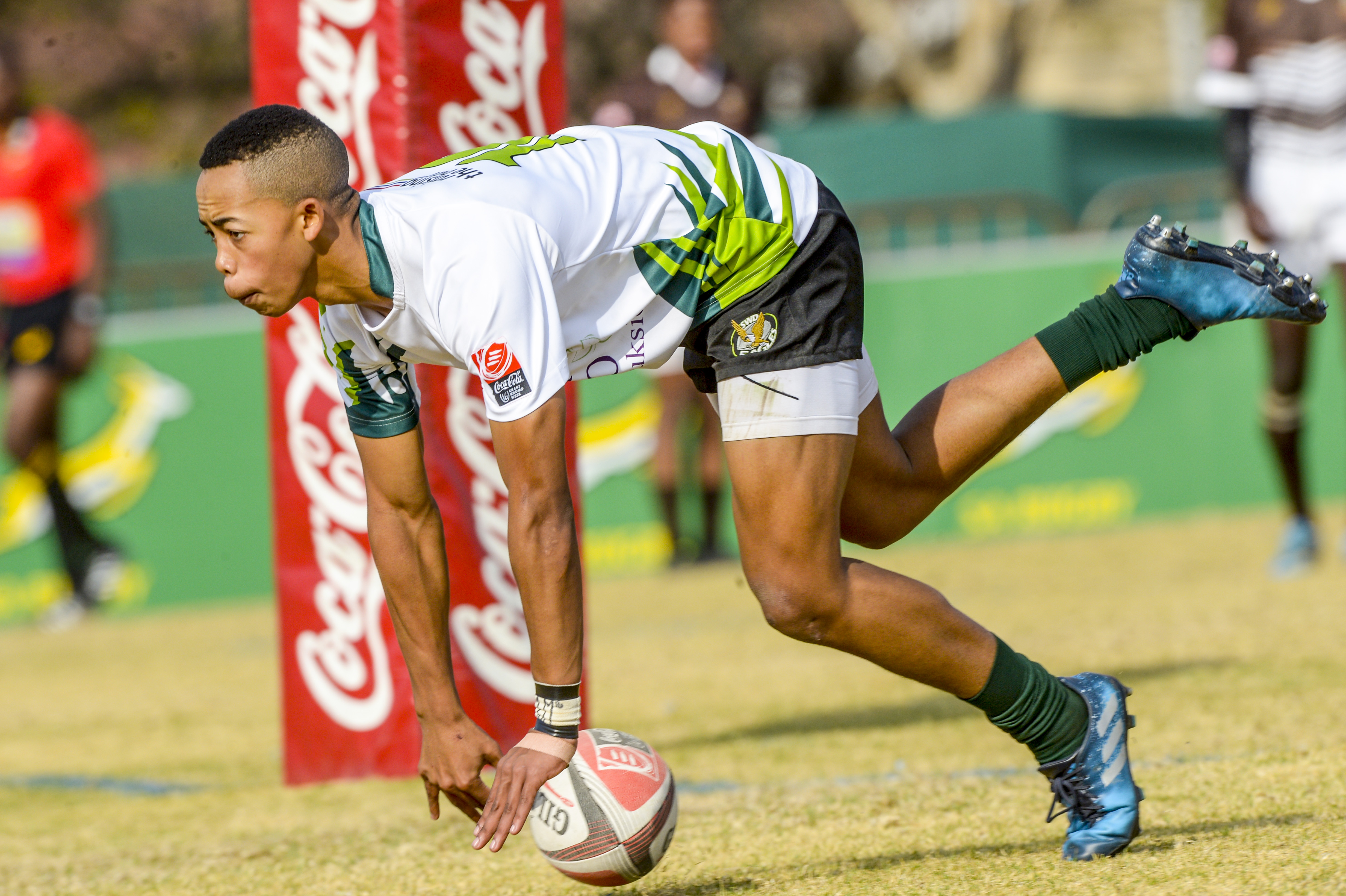 Top U16 teams stamp their authority at Grey

Western Province, SWD, the Free State XV, Boland and KZN on Wednesday registered vital victories in the second round of the U16 Coca-Cola Grant Khomo Week in Bloemfontein to stake a claim for a place in the final match of the tournament on Friday.

Western Province defeated the Free State 37-22, while SWD beat Border 32-27, the Free State XV outplayed the Pumas 48-24, Boland pipped the Limpopo Blue Bulls 25-22 and KZN beat Namibia 46-13 in matches played at Grey College. These results ensured that they were the only unbeaten sides in the tournament going into Friday’s final round.

Western Province got their clash against the Free State off to a strong start thanks to a well-balanced effort between their forwards and backs, which saw them build up an encouraging 27-7 lead in the second half. The Free State fought back with intent as the clock wound down and the rewards followed as they scored two tries to close the gap on the scoreboard to eight points. They continued to show their fighting spirit in the dying minutes, but they were denied by the defense, while the Cape side sealed the 37-19 victory with a late try and subsequent penalty goal.

SWD survived a determined fightback from Border in the dying minute’s thanks to their solid defense to secure a 32-27 victory. The match was particularly memorable for SWD flyhalf Jaylen James who scored two of the team’s four tries and kicked three conversions and two penalty goals for a personal tally of 22 points. Border, meanwhile, scored four tries – two of which were earned in the second half – but their efforts proved to be too little too late.

The Free State XV’s impressive attacking skills and ability to convert their chances into points handed them the edge against the Pumas as they powered their way to a 48-24 win. The home team’s centre Joubert Schoeman and winger Otshepehile Lentsa were standout performers as they contributed three and two tries respectively to the team’s tally of seven. The Pumas earned four tries for their efforts, but their porous defense cost them dearly.

Boland’s accurate goal-kicking proved to be the difference on the scoreboard in their 25-22 win over with the Limpopo Blue Bulls, as the side was outscored four tries to three. Boland flyhalf Nathan Engelbrecht slotted over two penalty goals and two conversions, while the Limpopo side only converted one of their tries.

KZN, meanwhile, overcame a strong challenge early on from Namibia in their clash to register an impressive 46-13 victory, with the side crossing the try line six times thanks to their effective attack. Namibia scored their first try early in the match and added a penalty goal before the break, but the Durban side’s strong defense limited them to only one more try in the match.

In another nail-biting encounter, a last-gasp try by the Golden Lions, after sustained pressure against the Blue Bulls in the dying minutes of their clash, left the teams level on 29-29. The unsuccessful conversion and a subsequent wayward penalty kick, left the teams settling for the draw. The match was thrilling as the teams were neck on neck throughout, with the Blue Bulls taking a narrow 19-17 lead at the break. The Lions outscored them five tries to four, but the Blue Bulls’ accurate kicking assisted their cause.

Earlier in the day, three penalty goals and a conversion by Eastern Province flyhalf Juandre Liebenberg allowed his team to claim a narrow 26-24 victory against the Griquas in a tight match, despite the Kimberley side outscoring them four tries to three. Griquas winger Jacquin Van Wyk scored three of his team’s tries, but this was not enough to steer them to victory.

The clash between the Western Province XV and the Griffons was gripping as both teams ran hard on attack and produced a solid defensive effort, which saw the match being decided on goal kicks. Each of the sides scored two tries, but four penalty goals and a conversion by the Cape side’s flyhalf Kade Wolhuter to two successful conversions and two penalty goals by the Griffons earned Western Province XV the 24-20 victory.

The Leopards and Valke were involved in a physical encounter as both teams tried to use their big forwards to gain ascendancy. The Valke, however, made the most of their try-scoring chances, with No 8 Franco Enslin earning a hat-trick to add to another try, while they limited the Leopards to only two tries for a 28-10 victory.

Zimbabwe dominated their clash against Border CD completely and they ran riot on the attack as they snuck through the gaps in the defense at will. This performance earned the African side a 34-0 lead at the break, while they increased their try tally to nine in the second half for a comprehensive 49-0 victory.

The U16 teams will have Thursday off, while the U13 Coca-Cola Craven Week teams will return to the field for their penultimate round of matches. One of the main games of the day will be the Test match between Zimbabwe and Namibia.