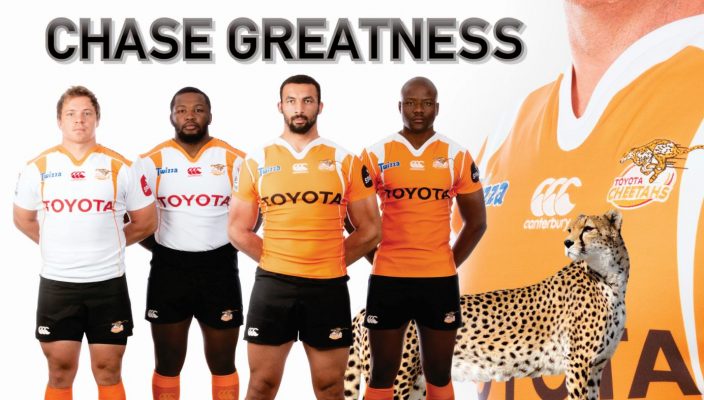 ]: Canterbury SA , locally distributed by Brand ID Ignite , has announced their Associate Sponsorship of the Toyota Cheetahs for the 2017 and 2018 seasons, with immediate effect.

The sponsorship will see Canterbury become the official kit supplier and associate sponsor to the Toyota Cheetahs and the Free State Rugby Union.

Canterbury is a UK-based sports clothing company who’s heritage is in rugby. The company is named after the Canterbury area in New Zealand where the company started to make knitwear in 1906. Other than producing rugby kits, the brand is also known for their rugby protective wear, rugby and lifestyle clothing. The brand is widely regarded through rugby-playing nations as the best rugby kit manufacturer in the world including the kit sponsor for global rugby teams such as England, Ireland, Japan and The British Lions.

“Our Associate Sponsorship makes perfect sense in terms of our International & Local brand alignment to be the no1 Rugby brand in the world. We are delighted to be associated with the Toyota Cheetahs,” says Du Toit Botes, Brand President of Canterbury from Brand ID “The Toyota Cheetahs are a very well supported team across South Africa and are the perfect platform for Canterbury to give back to the rugby loving community of the Free State. The Toyota Cheetahs are also known as one of the darlings of South African rugby and are considered as one of South Africa’s Big 5 provincial rugby Unions, making us a proud supporter”. Wayne Bebb, Chief Executive of Brand ID Ignite added “Canterbury selects our sponsored teams with great care and chooses to work with teams that subscribe to the values of the brand. The Cheetahs are a superb team rich in history and the essence of rugby in this region and we are proud to align our brand with the team.”

Harold Verster, MD for the Toyota Cheetahs says; “We are very proud to be partnering with Canterbury as our new kit supplier. Canterbury is a world renowned Rugby brand and we are excited to play our style of Rugby in Canterbury’s quality kit. Our Jersey and kit design for 2017 is exciting, fresh and of the highest quality thanks to Canterbury. We are looking forward to a relationship between two Rugby brands.”

Launch of the new Canterbury jersey for Toyota Cheetahs pic.twitter.com/XTPcGKJ35F