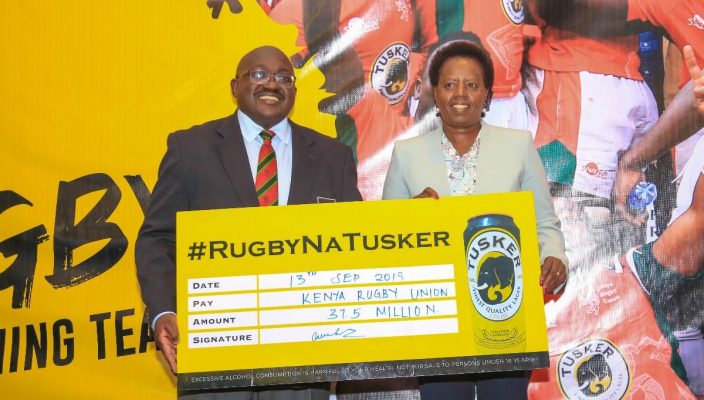 The Kenya Breweries Limited has today announced a KES.115 Million Investment in the sport of rugby in Kenya through its flagship brand, Tusker.
The announcement is the latest chapter in the brand’s long history with the sport of rugby, which dates back to the early 1990s when Tusker Lager first took up title sponsorship of the Safari Sevens.

From this investment, Kshs. 37.5 Million will go into supporting the Kenya Rugby Union in all its activities, including the men’s and women’s national Sevens and Fifteens teams. The brand’s investment will also go into rugby clubs across the country as well as universities in an effort to grow and nurture rugby talent in Kenya.

Speaking at the launch ceremony held at the Tamarind Hotel, KBL Managing Director Jane Karuku, expressed the company’s delight in announcing this investment in the sport.

This announcement comes at an opportune time for Kenyan rugby, as the Sevens teams kick off preparations for the Olympic qualifiers to be held later in the year.

Mrs. Karuku also mentioned that part of the investment will go into ensuring that this year’s edition of the Safari Sevens will return the tournament to its former glories.

“We want to see the Safari sevens this year, getting back to its former glory, when it was the Tusker Safari sevens that is why we have also set a side part of our investment to ensure that we achieve this,” she said.

Speaking at the same event the EABL Marketing & Innovation Director Graham Villiers-Tuthill, reiterated the company’s commitment towards turning rugby into a professional sport in the country.

“We have walked with Kenya rugby through all these years and today marks yet another chapter in our journey to seeing Kenya become a professional rugby playing nation.”

On his part the Kenya Rugby Union Chairman, Mr. Oduor Gangla “Tusker has been associated with the Safari Sevens in different capacities for over twenty years, as the Title Sponsor and as the Official Alcoholic Beverage partner. It is very reassuring to see them continue to support this event.”

“It promises to be a great march forward for players and fans and we thank Tusker for their continued belief and support of the Kenya Rugby Union,” Gangla concluded.

After a successful national sevens series, rugby action moves to Nakuru, on the 21st of September, where the Kenya Simbas will host Zimbabwe in their last fixture of the 2019 Victoria Cup, with the Safari Sevens slated for the 18th to 20th of October.