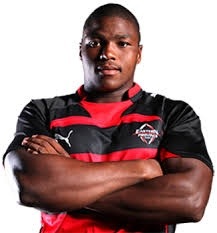 EP Kings players Lizo Gqoboka and George Whitehead have both been called up to take part in the Sharks wider training camp ahead of the 2014 Super Rugby Season.

“Both of them have been loaned out to train with the extended squad from tomorrow through to December, when the Sharks are expected to finalise their squad for the 2014 Super Rugby season,” he said.

“Should they be selected, this will allow them to gain additional Super Rugby experience next year, ” he said.

Head coach, Matt Sexton, said he was delighted that both Gqoboka and Whitehead had also been able to get the opportunity to take part in pre-season training for Super Rugby, and stood a chance of being selected to play next year. This follows after Shane Gates and Rynier Bernardo joined the Cheetahs training squad last week.

“We have a number of talented players who have shown what they are capable of on the field, and we are delighted that they have the opportunity to possibly play Super Rugby next year,” he said.

EPRU President, Cheeky Watson said it was great to see someone like Gqoboka being given the opportunity of playing top flight rugby again next year.

“Lizo’s high school in Tabankulu never played rugby. He only started playing the game at aged 19, when he joined the Queensburgh Club in 2009,” he said.

Watson said Gqoboka’s natural talent had been noticed, and he had been called up to represent the EP Kings u21 team in 2011, before making his professional debut against Border Bulldogs on 16 March 2012 in the Vodacom Cup.

Both Gqoboka and Whitehead were regular faces in the Southern Kings 2013 squad.

Watson said he wished both boys well in their endeavours.