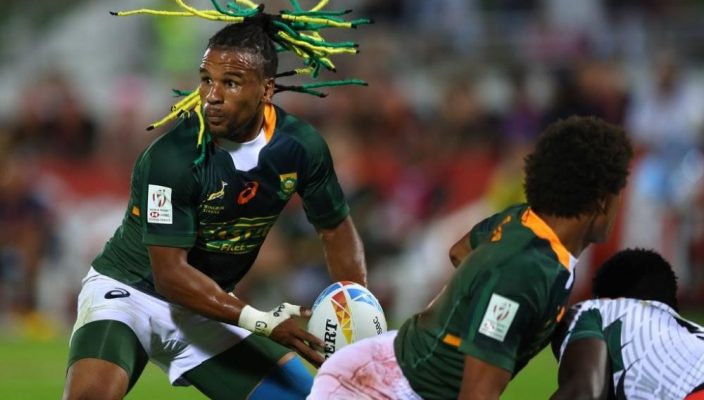 The Springbok Sevens team scored 19 unanswered points against England in their Pool D decider at the Emirates Airline Dubai Sevens to clinch top spot with a 19-14 win and will face Argentina in the Cup quarter-finals of the tournament on Saturday.

The success of that clash, at 09h58 (SA time) on Saturday morning, will be determined by how well the team recover from their matches on Friday. Blitzbok assistant-coach Renfred Dazel said the new format over three days where the main field is shared the women’s tournament, will take some time to get used to.

“The time between matches are match longer now that we share the tournament with the women’s series and that is something new for us,” said Dazel.

“Quarter-finals are always tough in a three-day tournament, so we need to recover well tonight to be ready for Argentina in the morning. We have a good idea what to expect from them, but the focus will be on what we want to do and how we want to play.”

Dazel applauded the effort of the team against Spain and England and said they improved from the first day, where they edged Kenya: “We are pleased with the effort. We had much better shoulders on bodies with our defence and that was pleasing.”

The Blitzboks were down 14-0 against England halfway through the first half but showed their characteristic fighting spirit to overhaul the English. Two tries by Justin Geduld proved the difference.

If they had the option, the South Africans would probably not mind replaying minutes four and five of their pool decider. Ruhan Nel was yellow-carded and in those two minutes, both Ollie Lindsay-Hague and Dan Norton scored converted tries.

The Blitzboks deserve credit for the way they responded. A try by Ryan Oosthuizen on the buzzer gave them something to show for the half and Neil Powell (coach) reminded his team what the crib sheet showed at the break.

Powell also used his bench to very good effect and Geduld benefitted handsomely from the fresh legs around him.

His brace – in the ninth and 11th minutes, both converted by Selvyn Davids – looked to have settled the deal, but England attacked strongly with no time left. JC Pretorius stood strong over the ball though and won a crucial turn-over on his own line.

Earlier in the day the Blitzboks were way too sharp for Spain, winning 35-5, although they started on the back foot. The Spaniards held on to the ball quite well in the opening minutes, but the Blitzboks’ defence stayed intact.

A turn-over gave the ball back to South Africa and Rosko Specman finished a well-worked try. Chris Dry crossed the line soon after but was nearly forced over the dead ball line in getting his try. Geduld converted both, handing the Blitzboks a 14-0 lead at the break.

A strong run by Springbok Sevens captain Siviwe Soyizwapi handed him his first touchdown of the tournament. The winger used his stepping and acceleration to good enough to score under the posts.

Spain managed to cross the South African’s line though, with Pol Pla pulling one back, but the Blitzboks struck back twice after that. Pretorius raced through to score and Specman’s second was his team’s fifth.

The quarter-finals are (SA times):

• Meanwhile, the SA Rugby Sevens Academy will face the Apache, an invitational team from England, in the quarter-finals of the International Invitational on Saturday.

After dismantling the Rambling Jesters and French Military on Thursday, they had way too much class for the Russia Development side on Friday, winning 47-0. A very strong second half performance blew the Russians away.

An early try from Werner Kok put the Academy side on the front foot, with Mfundo Ndhlovu dotting down soon after. That was the only scores in the first half, which saw South Africa lead 14-0.

A try by Impi Visser started the avalanche of points to follow in the second half. Ndhlovu then stepped through several would be defenders to assist Stedman Gans to a five point. Ndhlovu then turned scorer after good work by Visser.

Kok also got a second with a strong run before Afrika sliced through to convert his own try. Branco du Preez and Afrika kicked six of seven conversions, with a number from the touchline.