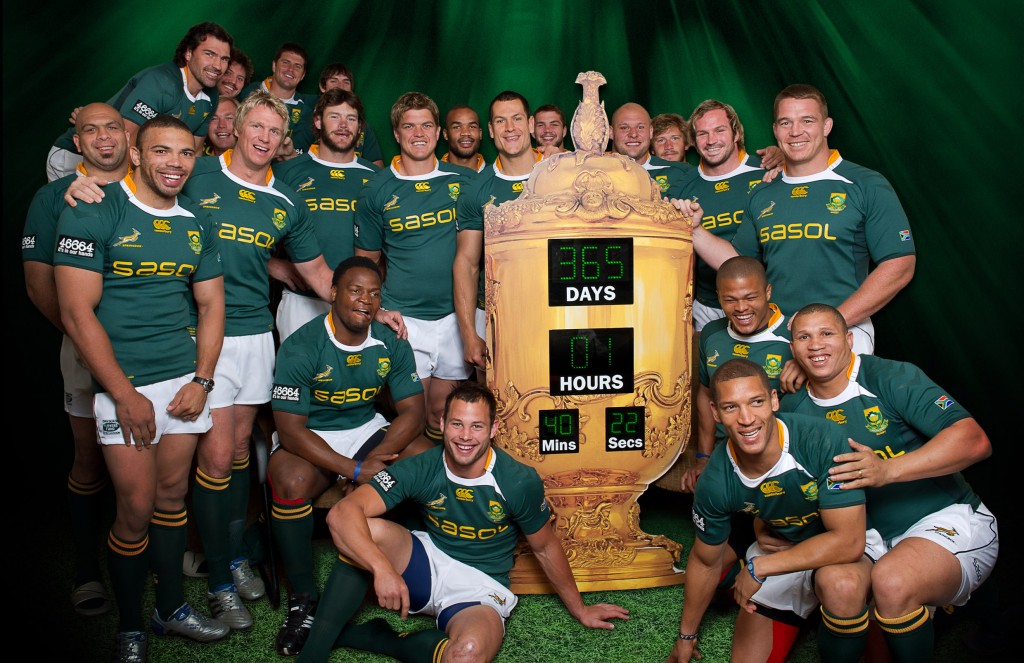 The countdown to the Springboks’ defence of the Rugby World Cup begins in earnest today – precisely one year out from the tournament kick-off. The South African Rugby Union (SARU) unveiled its Unite 2011 campaign, appealing to all South Africans to get behind the team as the clock begins to tick away.

The 2011 tournament opens on September 9, 2011 when hosts New Zealand take on Tonga at Eden Park in Auckland. Two days later the Springboks begin their campaign against Wales in Wellington. The tournament concludes six weeks later back at Eden Park for the final (October 23).

It will be the Springboks’ fifth tilt at the title and, having won the title twice already, they will be chasing the added distinction of becoming the first nation to successfully defend the Webb Ellis Cup.

“It may seem a long way away of after such disappointing results in the Vodacom Tri-Nations, but the lesson of history is that the Springboks have every chance of retaining the Rugby World Cup,” said Mr Oregan Hoskins, president of the South African Rugby Union (SARU).

“Four years ago results were probably even more concerning but a year later John Smit lifted the trophy and l’m sure South Africans will unite behind the team as they did four years ago.

“The soccer World Cup saw the country unite behind Bafana Bafana and we want them to keep the flag flying for the Springboks over the next 12 months and then all the way to the final.”

The Unite campaign will gather momentum nearer kick off but, for now, Springbok supporters can unite the behind the team by going to www.unite2011.co.za, registering their support and earning the chance to win some special prizes.

The first winner drawn from those registering will win a trip for two to Dublin to watch the Springboks’ Test against Ireland at the new Aviva Stadium on November 6.

• The Springboks have eight remaining Tests (and a match against the Barbarians) between now and kick off in the 2011 Rugby World Cup.
• South Africa have been drawn in Pool D together with Wales, Fiji, Samoa and Namibia.
• It is the fourth time in five tournaments that South Africa have been pooled with Samoa.
• South Africa have never met Wales at a Rugby World Cup tournament.
• As well as winning the 1995 and 2007 tournaments, South Africa finished 3rd at the 1999 event.
• The Springboks have won 21 out of 24 RWC finals matches for a winning percentage of 87.5%.
• Should South Africa top Pool D then they will play the runner up in Pool C – most likely to be one of Italy, Australia or Ireland in the quarter final.
• Should the seedings go to expectation the Springboks will meet New Zealand in the semi finals.