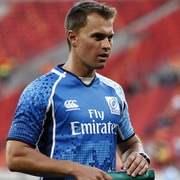 Marius van der Westhuizen has been appointed to take charge of the Carling Currie Cup final in Pretoria on Saturday, when the Vodacom Bulls welcome the Cell C Sharks to Loftus Versfeld for a repeat of the 2020 grand finale of South Africa’s flagship domestic competition.

The match is scheduled to kick off at 17h00 and will be broadcast live on SuperSport.

It will be Van der Westhuizen’s second Carling Currie Cup final after he also handled the whistle in 2019, when the Toyota Cheetahs beat the Sigma Lions in Bloemfontein.

Van der Westhuizen will be assisted by AJ Jacobs and Aimee Barrett-Theron on either side of the field, while Stuart Berry will serve as the Television Match Official.

“I would like to congratulate Marius, AJ, Aimee and Stuart on their appointments for Saturday’s final in Pretoria,” said SA Rugby CEO Jurie Roux.

“They have been rewarded for their consistency and efficiency throughout the season, which is a testament to their performances as match officials.”