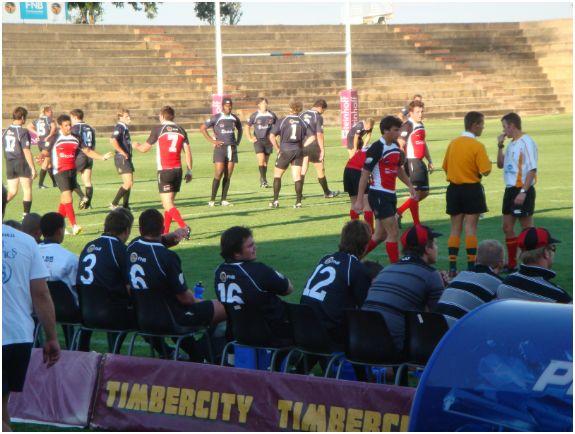 University of the Free State hostel side Vishuis retained their hostel title that they won in 2009 by defeating JBM by 43-16 in the 2010 final.

The men in black dominated the game and they were particularly strong upfront, securing great ball and momentum. The victory secures Vishuis a place in the Varsity Cup competition in 2011.

They did not have it all their own way though. JBM made a great start to the game as they were clearly fired up. The weekend also featured JBM’s reunion and the presence of the old-boys gave the side a little extra motivation for the match.

Vishuis absorbed the early pressure really well and gradually took control of the match. By half-time they had built up a 19-6 lead and the writing appeared to be on the wall.

The second half saw Vishuis take complete control of the match and their backs  got into the game more and more. JBM played with a lot of determination and guts as you would expect of such a proud hostel but at the end they were beaten by a better side.

Winning 2 finals in a row is a great achievement for the men from Vishuis,especially considering that as little as 4 years ago they were not regarded as a rugby powerhouse. Bloemfontein’s top dogs will look to repeat their achievement of 2010 by defending their Varsity Cup hostel title in 2011. This may well be within their reach after a great 2010 season.