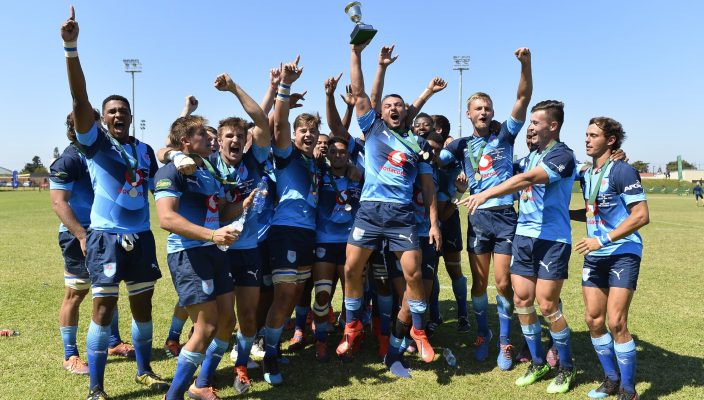 The Vodacom Blue Bulls claimed the SA Rugby U19 Championship title at the City Park Stadium in Cape Town on Saturday with their superior kicking game and wise decision-making at crucial times earning them a 32-24 victory against the hosts, DHL Western Province.

The first half was tight, with the Vodacom Blue Bulls taking an early 14-0 lead, but DHL Western Province fought back strongly with three back-to-back tries to sneak into a 17-14 halftime lead.

The visitors, however, outscored DHL Western Province two tries to one in the second half and kicked two vital penalty goals, which steered them to the 32-24 victory and the title they lost out last season.

Hendrik Beukes (flanker) opened up the scoring for the Pretoria outfit in the sixth minute after receiving the ball in space out wide to touch down, and Lionel April (flyhalf) slotted over the conversion.

They built on this with a try by Ethan Burger (prop) minutes later from a pick-and-go to stretch their lead to 14-0.

DHL Western Province hit back in the 16th minute with a try by Duan Bredenkamp (prop), from good forward momentum, and Juanre de Klerk (winger) added to this five minutes later as he dived through in the corner to reduce their deficit to 14-10.

The home team had the last say in the half as Matt Cordy (flanker) picked up a loose ball and dashed through a gap in the defence to sneak into a 17-14 lead at the break.

The Vodacom Blue Bulls showed their intent early in the second half with Werner Gouws (lock) stretching over the chalk in a tackle to push them back into the lead, and April added a penalty goal minutes later to increase their lead to 22-17.

DHL Western Province hit back in the 55th minute as Christie Grobbelaar (centre) touched down after several phases on attack to hand the hosts a 24-22 lead, but this was cancelled out soon after by Vodacom Blue Bulls winger, Kabelo Mokoena.

The visitors continued to make the most of their point-scoring chances as the clock wound down, with Steyn van der Spuy slotting a vital penalty goal with minutes to play to push them 32-24 ahead.

The visitors lost their captain and scrumhalf, Bernard van der Linde, to a yellow card a minute before the final whistle, but they were able to shut out the home team close to their tryline on the stroke of fulltime for the 32-24 victory.