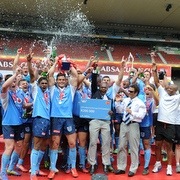 The Vodacom Blue Bulls Under-19 team crowned a perfect season on Saturday by beating a gutsy MTN Golden Lions side 35-23 in the final of the Absa Under-19 Provincial Championship.
This was the team’s 14th win of the season and they remained undefeated in the competition.

The Blue Bulls scored four tries to two and never surrendered their strong 21-9 lead at the break of the final, played at a gusty DHL Newlands Stadium in Cape Town.

This win is a perfect send-off for Vodacom Blue Bulls Under-19 coach Paul Anthony, having lost the last three finals the team contested.

The coach will be off to Durban next season to take up a position with The Sharks.

The Blue Bulls were on the scoreboard first when flyhalf Kobus Marais kicked an early penalty, with the Golden Lions not rolling away in a tackle.

Golden Lions pivot Jako van der Walt got his side on the scoreboard immediately after as the Blue Bulls went offside at a ruck to level matters in the fifth minute.

There was some free-flowing action early on as both teams spread the ball, but tight defences, good turnovers and handling errors stopped many promising moved.

Marais, who only kicked six from eleven, pulled his second penalty attempt, but slotted a longer range effort shortly after to punt his side back into a 6-3 lead.

The Blue Bulls were getting good forward momentum and after a good rolling maul forced the Lions to concede a penalty, Marais kicked his third penalty.

A good Golden Lions maul resulted in a penalty to them and replacement-flyhalf Brendan Hewitt kicked his first penalty to close the gap.

A counter-attack from deep by winger Duncan Matthews resulted in Blue Bulls prop Pierre Schoeman crashing over for first try of match.

Hewitt kicked a snap drop goal after good driving play by his forwards, but the Blue Bulls finished the half strongly when Keagon Gordon was worked over in the corner with second left to play in the first half, giving the Blue Bulls a 21-9 lead.

Marais had to early chances in the second half to extend the lead, but both kicks went astray.

Another great counter-attack started in their own 25, saw Duncan Matthews finish it off on the other side of the field. In between though was some delightful interplay and inter-passing with an inside pass from Marais opening the gap up for Matthews. Marais converted (28-9).

Red cards to the number 8s, Chris Massyn (BB) and Jano Venter (Lions) reduced their player numbers but opened up space on the field.

The Golden Lions remained on attack and scrumhalf Jan Meyer scored after a great dummy close to the line. The Lions scored another soon after with hooker Malcolm Marx and when Hewitt converted, the Lions were suddenly in touching distance again (28-23).

Marais pushed another penalty attempt to the right and the Blue Bulls again reverted to their running game to clinch matters. Another turn-over, followed by a strong run from Jesse Kriel raced Gordon over for his second try and sealed the win.

“We said to ourselves from day one that we wanted to win this. The guys knew they could do it. Congratulations to the whole squad,” Kriel said.