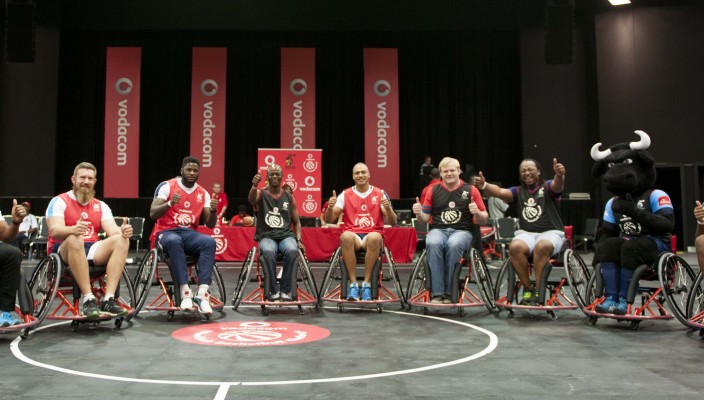 15 NOVEMBER 2015 – Gauteng Province snatched a 58-54 victory over North-West Province to be crowned 2015Vodacom Wheelchair Basketball Challenge champions and the deserving recipients of R100 000 in prize money at Vodacom World in Midrand on Saturday.
The team had to ward off a serious challenge from 2014 champions North West as the two sides battled for the top prize in local wheelchair basketball.

The grand finale turned out to be a stunning advertisement for local wheelchair basketball as it came to an intense and dramatic end.

The two sides were neck-on-neck for the majority of the match with Gauteng going into the half-time break with a narrow 28-27 lead.

In the final quarter North West managed to gained a six-point lead, and as the clock counted down the victory seemed a mere formality.

Gauteng launched a valiant fightback while North West lost composure in the dying moments of the match as their discipline allowed the opposition into the match to claim the victory.

Due to the close nature of the match, Vodacom’s Bronson Mokabela, Executive Head Sponsorship & Regional Marketing, announced that North West would be awarded R25 000 for their efforts.

“Thank you to everybody that came out today we can all agree it was a close one and it could have gone either way and because of the level of sportsmanship and passion we saw today, we as Vodacom will give North West R25 000,” Mokabela said.

“Vodacom have been a partner of wheelchair basketball for 15 years now and we are committed to the cause.”

In the curtain-raiser Vodacom Bulls players swopped their boots for wheelchairs as they were taken out of their comfort zone.

Trading rugby poles for hoops, they soon learned that wheelchair basketball is both physically and mentally demanding.

The Vodacom Bulls sent a well-balanced contingent that offered both speed and height.
Second-rowers Marvin Orie and Irne Herbst gave the celebrity team the vertical advantage.

Bulls fliers Jamba Ulengo and Travis Ismaiel in turn added skill, and speed to their charge.

The quartet had some high-profile opposition in World Cup bronze medal winning Springbok Adriaan Strauss and Vodacom Bulls mascot Bulletjie throwing their weight around on the court.

It was the second consecutive year the event was hosted at Vodacom World, where a mobile court was assembled.

Last year Vodacom made a major financial contribution to fund the court for the use of Wheelchair Basketball South Africa’s (WBSA) development programmes.

In its aim of making a tangible difference in the development of wheelchair basketball in the country, Vodacom donated 12 development wheelchairs to WBSA.

Specialised wheelchairs are generally expensive and players often have to use the chairs they use for everyday life to practice the sport they love.

WBSA will use the chairs to develop up-and-coming talent which would ultimately benefit the sport in the long run.

“As Vodacom we speak about changing the game and I think through our contributions we are helping in one way of changing the game for these players and the ones that are coming through the ranks,” Mokabela said.

“The court was our first donation last year and the 12 wheelchairs will help the kids that are coming through the ranks who use their regular wheelchairs to now have technical efficient equipment.”

Vodacom is proud to be a sponsor of wheelchair basketball for the past 15 years.